Back the Boys in Green for Australia 2015 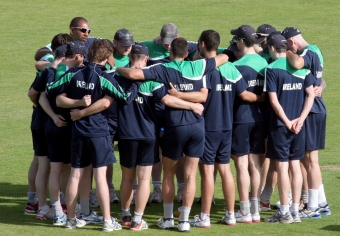 The Ireland squad are looking forward to playing UAE next week

Cricket Ireland looks for the Irish public to get behind their nation’s cricketers as they push for qualification to the 2015 ICC Cricket World Cup in Australia and New Zealand.

Ireland face the UAE in Sharjah in two vital ICC World Cricket League ties next week. If they win both matches, Ireland will be one step closer to another World Cup journey following on from their memorable performances in the Caribbean in 2007 and India in 2011.

Cricket Ireland are looking for the Irish public to get behind their team ahead of the matches on the 18th and the 20th of March just after St Patrick’s Day by following @Irelandcricket on Twitter and using the hashtags #coybig (Come On You Boys in Green), #RoadtoOz and #GdayPaddy to send the squad messages of support this St. Patrick’s Weekend.

You can also ‘Like’ Cricket Ireland on Facebook, www.facebook.com/cricketire to show you’re behind the boys and send your message to the squad on the Facebook Page.

A selection of these messages will be sent through to the Irish squad on St. Patrick’s Day and there’s no doubt it will provide them with a big boost ahead of the crucial matches.

Coach Phil Simmons explains why it’s so important that players know the Irish public are behind them back home. “When the team have done well in the past there has been real momentum behind them from the supporters in Ireland. The pride they have put in the jersey and continue to give the Irish people can’t be underestimated as a motivating factor for the boys out here in the UAE.”

Irish star John Mooney says that playing in the World Cup in Australia and New Zealand would be a dream come true. “Playing cricket on the biggest stage is the best feeling in the world. Ever since that win against Pakistan on St Patrick’s Day back in 2007 we’ve had that belief that we can beat the best and knowing that everyone in Ireland is right behind us would make a big difference to all of us out here ahead of the huge matches against the UAE. We’ll be looking to evoke that great Irish spirit around St. Patrick’s Day for both games and hopefully come up with two wins.”

Both Matches will be Live streamed thanks to the ICC so you can watch how the Boys are doing. For details of how to view or to follow the match on Live Scoring visit www.cricketireland.ie on game day.