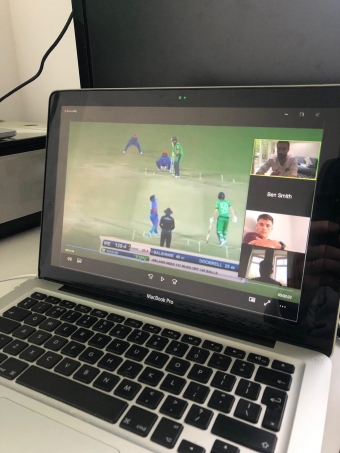 DUBLIN – The COVID-19 pandemic has severely disrupted life as we know it, but it has also allowed opportunity and creativity to come to the fore with Ireland Men’s captain Andrew Balbirnie providing a ‘virtual batting masterclass’ to a group of young and emerging cricketers in the Shapoorji Pallonji Cricket Ireland Academy.

Nineteen squad members from the men’s Senior and Emerging Academy squads, and a number of talent pathway coaches, participated in an interactive and engaging 45-minute session led by the national captain covering a number of areas relating to batting technique and approach.

“This is the first in a series of masterclasses that we will be running over the next few weeks. The idea is to take our players on a journey around the world and learn from some of our senior team’s best individual performances in different conditions against different opposition in different skill sets.”

“The set-up over video conference call was a mix of visual and verbal, while also combining statistics and notes to enhance learning. On this occasion it was our batters who had to come up with their own game plans based on their strengths, while taking into account the opposition and conditions.”

“The squad was very grateful that Andrew was able to give up his time along with Ireland Batting Consultant Ben Smith. They were outstanding in terms of their delivery, openness and honesty and really engaged the group. Balbo has even followed up with some of the Academy players since who had further questions, it’s absolute gold for our lads.”

“Since we’ve entered the lockdown, the Academy coaching and support staff have set the squad skills and fitness challenges, and asked them to really reflect on their game and where they want to go in the sport. Greg Hollins, our Strength and Conditioning Coach, has also begun to deliver online training sessions which is a great help and devised an exceptionally inventive programme which has helped everyone adapt but still progress. Despite the limitations we’re all under, I think this has been a very productive time for the players, and a great learning experience for the coaching staff. The group see it as an opportunity to push on and make gains in so many areas.”


Speaking after the session, Andrew Balbirnie was pleased with the outcome:

“I didn’t set out to tell these guys how to play, as they are all good players in their own right, but felt if I could help them by providing an insight into what my thinking was in certain scenarios, that might be of value. One key area Pete wanted to cover was playing in subcontinent conditions - it is a big part of any international cricketer’s career, so we talked about how to go about setting up an innings, particularly in testing conditions like India where spin plays such a huge part.”

“Our Performance Analyst Jay Shelat was able to integrate footage from my unbeaten century against Afghanistan last year into the session, which was very useful as the guys could actually see what I was doing while I was explaining to them my approach and reasoning around certain decisions I made.”

“I can’t say I’ve done too many ‘virtual’ sessions, but I found it very interesting and another great way to hopefully instil some sort of knowledge to the younger lads. The players and coaches were all very engaged, which helped the process and made for great interactive conversation.”

The Academy’s male programme is split into two squads - an Emerging Academy squad and a Senior Academy squad. The average age of Academy participants tends to be around 18 years of age, and the youngest players can start at 15 years of age, however, there is no specific age limit on players benefitting from the ‘finishing school’.

The Shapoorji Pallonji Group, which was founded in 1865, is a business conglomerate based in Mumbai, India, with interests in construction (including residential, commercial and industrial), real estate, infrastructure (comprising power, ports, rail and roads), biofuels and agriculture, consumer products, electro-mechanical and MEP services, water treatment, oil and gas, EPC contracting, facades and interiors, engineering, textiles and shipping and logistics.

Today, with over 26,000 employees and more than 20 sectors, Shapoorji Pallonji has evolved and grown exponentially into multiple business segments with a progressive outlook and a thoroughly professional approach. The Group today has a strong presence in India and internationally including the Middle East, Continental Europe, South East Asia and Africa. With a rich legacy of over 149 years and a consistently superior track record, Shapoorji Pallonji remains committed towards excellence in each domain of its operations.