Balbirnie Century Puts Ireland in Control Against The Netherlands 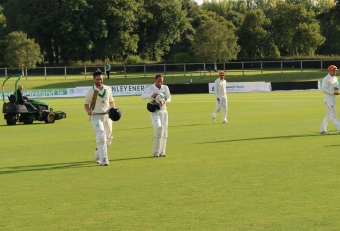 ANDREW BALBIRNIE’S maiden first-class hundred has put Ireland in a commanding position at the end of the first day of their ICC Intercontinental Cup clash with The Netherlands at Malahide.

The 26 year-old became Ireland’s first centurion as a Full Member as the Irish dominated an admittedly under-strength Dutch attack to finish the first day on 292 for 2.

Having been put in to bat on a pitch which still had a little bit of damp after a torrential downpour on Monday, Irish openers Ed Joyce and William Porterfield negotiated a tough opening hour, albeit with a bit of fortune as several half-chances went begging, which was to be a feature of the day’s play.

Joyce hit 6 fours in an entertaining 43 before pulling Peter Borren to square leg where Zulfiqar atoned for an earlier miss with a sharp, low catch.

The pair had added 71, and in a tense period before lunch, Porterfield and Balbirnie battened down the hatches ensuring no further losses.

The visitors stuck to their task well but Porterfield emerged post-lunch in a positive frame of mind, as he reached a deserved half-century, eventually making 60 from 149 balls (10 fours, 1 six). It came as a surprise when he edged Shane Snater low to Logan van Beek at slip.

He and Balbirnie had added 67, but with the ball 50 overs old, the stage was set for the Irish to up the tempo in the late afternoon and evening session.

Balbirnie and John Anderson took full advantage, pulling and driving impeccably as the Dutch attack tired as the day went on.

The Irish will look to reach 400-450 as quickly as possible on day two, and try and bowl the Dutch out twice - although given the excellence of the track and the poor forecast, it may be a tough challenge.

“It was great to get in such a good position after we were put in on a tricky deck initially after the rain,” said Balbirnie afterwards. “It sets us up well for the next three days.

“It’s my first century in first-class cricket so that’s fantastic. It’s always been one of my goals. To do it on home soil is great. I’m clearly delighted by the achievement and I’m not hiding away from that.

“Ed Joyce and William Porterfield did the hard work at the start and it’s great that myself and John Anderson took advantage of that with our partnership. Our plan is to bat once and that’s set it up nicely for us tomorrow.”

Continues Wednesday at 11am, free entry.