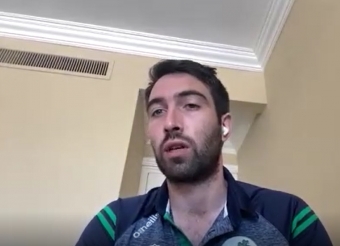 KINGSTON - Ireland captain Andrew Balbirnie spoke to the media ahead of the start of the series against West Indies today and spoke about the warm-up game yesterday, the loss of Paul Stirling from the first match and his first conversation with incoming head coach Heinrich Malan.

During a wide-ranging discussion that talked about the impact of COVID restrictions on players’ mental health, expected playing XI, conditions at Sabina Park and the warm-up game against Jamaica Scorpions, Balbirnie spoke about the team morale and what to expect from the series.

About the loss of Paul Stirling:

“It’s not ideal losing Paul, I think a series against Scotland back in 2014 was the last time I lined up in an ODI without him, but playing cricket through COVID you have to learn to adapt to these situations. We’ve got to produce more match-winners - we know Paul is one - but we’ve had some other guys who have had a pretty good year in ODI cricket, and they’ll need to step up again. To be that guy who scores big runs in a chase or takes the wickets to win a match for your country, in my opinion, there’s no better feeling - it’s why we play the game.”

About the warm-up game:

“Part of the reason for our approach to the warm-up game was to get some overs in the legs of the bowlers. This winter a lot of them have just been used to four-over spells, so getting a couple of four-over spells into the bowlers - even up to three spells during the game - will certainly benefit them. We had another good run out today in training, so when we get to the big ODI series I’d expect the guys will be raring to go.”

“I spoke to Heinrich Malan a few days ago on a video call for 25 minutes. I don’t know him personally, but I know a few people within New Zealand cricket and he comes highly-rated. I’m really looking forward to working with him - a new coach coming in can sometimes freshen the guys up nicely, and guys will want to perform and impress a new coach who is perhaps bringing in some new ideas.”

“If you look back at our last four ODI series we’ve put together a really good performance but unfortunately it’s been either side of a bad one.

“We’re quite good at bouncing back, but instead of being able to bounce back, if we can just keep bouncing forward, it’ll be great.

“Sometimes you do need a kick from the rear to get yourself going again but there are certainly times where we’ve put in a good performance and want to back it up the next time. That’s the challenge on this trip.”

A full preview and series details can be found here.