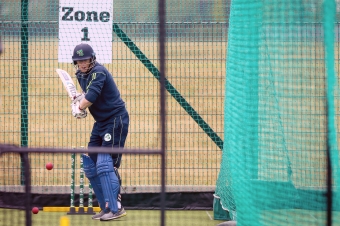 DUBLIN – Ireland Men’s captain Andrew Balbirnie and his squad have now completed their first week ahead of training ahead of what might be an important set of international fixtures in late July, while many cricket clubs across Ireland are gearing up for a return to training.

Balbirnie, who was named captain of Ireland Men’s side in late 2019, was speaking after a training session at the High Performance Centre at the Sport Ireland National Sports Campus.

“It feels great to be training – obviously when you haven’t been training for a while you are itching to get going again. The first day on Monday I was almost running out the door to get into the car and out to the National Sports Campus. It helped that it was a really nice day and the boys were in great spirits when we were out there.”

“The social distancing aspect hasn’t been too difficult, as you don’t spend too much time in close physical contact at training. Obviously the small things like wearing gloves when hitting catches to each other or doing fielding drills it feels different, but in terms of batting the coach is 22 yards away feeding the bowling machine or throwing the balls at you so in that sense it isn’t too different. Getting your temperature taken and making sure you’re washing your hands is a challenge to remember, but we just have to ensure these just become a habit and a natural activity when we arrive at training.”

“I think the big thing during lockdown was learning patience – we didn’t know when we’d be training or whether we’d be playing any games this year at all. You had to train by yourself and bide your time and make sure you are focussing that exercise on what you need to be doing. It was about getting yourself into a routine every day – naturally you have some bad days, and days where negative thoughts may creep in, so it was really important to stay positive.”

“The absence of cricket definitely made me appreciate what I get to do for a living – to travel around the world and play cricket – it’s something I missed hugely. Competing in games, being around your teammates and looking to win games for your country has been taken away from us for a brief period, but hopefully now we can start getting back to doing what we love.”

Discussions are still ongoing over the possibility of Ireland Men’s team playing three one-day internationals against England at the end of July, and the Men’s T20 World Cup still remains a distant prospect after the ICC deferred its decision-making on the tournament at its recent Board Meeting.