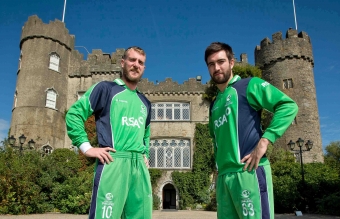 Andrew Balbirnie top scored with 86 as Ireland beat ACT Comets by one wicket in a thrilling encounter at Manuka Oval, as they successfully chased an imposing home side total of 305/5.

The Middlesex man struck nine boundaries in his 90 ball stay, sharing a crucial 6th wicket stand of 81 in just ten overs with the in-form John Mooney, who made 46.

The dismissal of Balbirnie, run out with 21 still needed, saw a late Irish wobble as Alex Cusack (10) and Andrew McBrine (2) both went cheaply.

The Irish run chase had been given a solid platform thanks to an opening stand of 75 between skipper William Porterfield (42) and Niall O’Brien (36).

A consistent batting display on an excellent track saw 8 of the Irish top 9 reach double figures, with only Stuart Thompson (1) missing out.

Earlier, Ireland had opted to field after winning the toss, and that decision looked fully vindicated as Graeme McCarter (1-51) removed Daniel Hughes in the first over.

John Mooney (1-71) struck shortly afterwards, but from then on the batsmen were firmly on top.

Alex Cusack (1-53) made a welcome return to bowling after missing most of the domestic season through injury, completing his ten over spell while picking up the wicket of Harriott.

Ireland now depart for New Zealand where they will play a further four matches, taking on Northern Districts and a New Zealand XI in Hamilton, before the tour concludes with games against Canterbury and Otago in Christchurch.

Ireland won by one wicket