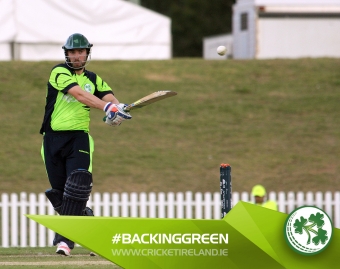 As the team travelled to New Zealand for their World Cup opener against the West Indies in Nelson, www.cricketireland.ie caught up with Andrew Balbirnie to talk about his preparation for the biggest tournament in cricket.

After arriving in Australia the team spent a week in the seaside suburb of Coogee before moving into central Sydney, where they were supported by former Australian international Brett Lee.

“It went well [in Randwick], we had a couple of days to acclimatise and then we got into the cricket.  Obviously we got used to the pitches, a bit more bounce and got a few of the cobwebs out before we started.  It’s a great spot, about 50 yards from the beach and another 50 yards to the right is where we were based for the week so it was ideal really.

“I actually didn’t work with him, but the bowlers definitely seemed to run in with a lot more purpose when Brett was there.  They can only take good things from that, he was one of the best bowlers in the world for a number of years so the guys can only learn heaps from what he’s told them.”

Lee isn’t the only new member of Ireland’s backroom staff, with Matthew Mott in as a batting coach and Sussex coach Carl Hopkinson specialising in fielding.

“I think Motty is very good at what he does, he gets to the point of things and he doesn’t beat around the bush – he tells us how it is.

“We see ourselves as a good fielding unit anyway, but to have Hoppo on board just adds more to the squad.”

Balbirnie’s unbeaten 63 against Bangladesh is just the latest in a series of great knocks from the Middlesex batsman, who has cemented his place in the team over the winter leading up to the World Cup.

“I think the big moment for me was when I got runs in the game against ACT Comets in Canberra, I got about 80 odd in that one and it kind of just clicked me into gear as such.

“It was kind of a hit and miss season, especially towards the end of the season with that Scotland series, but I knew if I got to the Australia tour and got a few runs in the couple of tours before the World Cup squad was announced – that is what is was about for me, as it always has been with batsmen, runs is all you can do - if you score runs they can’t be ignored and I managed to do that and things have gone well.”

There were also a few words about Andrew White, Ireland’s most capped player, who announced his retirement from international cricket earlier this week.

“The guys can’t speak highly enough about Whitey, he’s been around for a number of years.  I remember going to Clontarf when I was younger and watching him and the rest of the Irish lads play. “It’s a big loss for Irish cricket, he’s been at the centre of it for ten-fifteen years now, and I just wish him a happy retirement…he deserves it and hopefully he’ll still be involved with Irish cricket in some way.”

After completing warm up matches against Scotland and Bangladesh in Sydney, the team has arrived in Nelson, New Zealand, to face the West Indies in their opening match of the World Cup.  You can follow all the action, get behind the scenes access and see highlights of all World Cup games on www.cricketireland.ie.