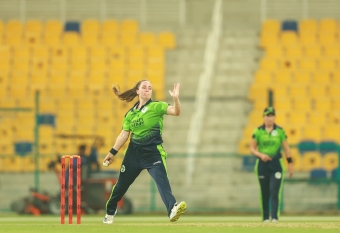 ABU DHABI – Despite an excellent fielding and disciplined bowling display, Ireland Women fell seven runs short in the run-chase against Bangladesh in the Final of the ICC Women’s T20 World Cup Qualifier tournament at the Sheikh Zayed Stadium in Abu Dhabi.

Both sides had already qualified for the 2023 ICC Women’s T20 World Cup in South Africa courtesy of their semi-final wins, but the Final lacked no drop in intensity as the teams battled for the trophy.

Ireland had set the match up well after being asked to bowl first – captain Laura Delany (3-27), Cara Murray (2-21) and Arlene Kelly (2-17) were the pick of the bowlers, while in the field it was evident the Irish side were on the top of their game for the Final, holding on to a series of difficult catches – and Mary Waldron once more displayed quick hands in a stumping off Kelly that saw the experienced keeper pull in a wide ball and quickly remove the bails before the batter was safe.

During the match, Delany became only the second Irishwoman to claim 50 T20 International wickets - behind her teammate Eimear Richardson.

After winning the toss, the Bangladesh openers started cautiously with two runs from the first 10 balls, but soon after it was the experienced Fargana Hoque Pinky who began to find the boundary. Hoque struck seven boundaries in an innings of 61 from 55 balls, anchoring the innings until she was dismissed in the 17th over.

While Bangladesh held plenty of wickets in hand for much of their innings, the Irish bowlers never released the pressure on the soring rate that they built up early. Murshida Khatun (6) and Niger Sultana Joty (6) played support roles for Hoque – and when Joty fell in the 10th over, the Bangladesh score was a pedestrian-looking 47-2.

Rumana Ahmed then joined Hoque and the pair put on a 49-run third-wicket partnership off just 37 balls, a partnership that was broken when Ahmed skied a ball off Murray and was caught safely by Waldron. Hoque followed shortly after, and Ireland sensed an opening. The Irish bowlers kept their line mainly wicket-to-wicket and finished much the stronger side with the last 25 balls producing six wickets for just 24 runs – Delany’s last over finished with a remarkable 3-3. Bangladesh finished their 20 overs on 120-8 and required an inspired bowling performance to defend a total that looked 10-15 runs below par.

Sensing pace-off on a slow pitch under lights was the best approach, Bangladesh bowled spin for all 20 overs of the Irish reply. From the moment opener Gaby Lewis (4) was deceived by left-arm off-spinner Shanjida Maghla in the second over – bowled through the gate – the Irish batters rarely looked settled. Delany (12 from 22 balls) and Eimear Richardson (18 from 15 balls) gave Irish fans a brief sense of hope with a counter-attacking 23-run stand for the fourth wicket, but the regular fall of wickets proved fatal in the end.

At 58-7 in the 13th over, Waldron (19 off 17 balls), a composed Kelly (28* off 24 balls) and Murray (13 from 10 balls) played impressive cameos, but the lack of wickets on hand was a challenging prospect to a lower-order battling hard against a mounting run rate. Eventually, Ireland finished a heart-breaking seven runs short.

During the post-match interview, Delany praised the bowling effort at the top by her bowlers but indicated that a lack of partnerships with the bat hampered the run chase. Asked about the team’s overall tournament performance, Delany said the squad was pleased, had gained great experience, and that their fielding was an area they had targeted and felt had developed well over the tournament.