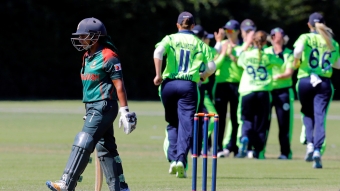 Ireland Captain Laura Delany won the toss and elected to bat – a formula that had worked so well in the tournament to date.

Bangladesh started brightly, putting on 28 runs in the first 20 balls, but Ireland’s go-to wicket-taker in this tournament – Lucy O’Reilly – struck in her first over, removing the dangerous Shamima Sultana (16 runs from 16 balls; three fours)

O’Reilly, who was awarded Player of the Match in the semi-final for her 3-13, again was the stand-out bowler taking career-best figures of 4-28 from her four overs. O’Reilly finished the tournament with 11 wickets at an average of 7.82 runs per wicket, and now heads off to England next week to join the ICC Women’s Global Development Squad along with team-mate and close friend Gaby Lewis (see story).

Ciara Metcalfe also shone with the ball, taking 2-24 from her four overs, including the key wicket of opener Ayasha Rahman. Rahman had compiled a career-best 46 runs (42 balls; five fours, two sixes) and looked like she could take the game away from Ireland, but her wicket in the 13th over was part of a Bangladeshi collapse. In the last 8.1 overs of the Bangladesh innings, Ireland claimed eight wickets and conceded just 42 runs, giving them hope of a reasonable run-chase.

With 123 the target for Ireland, the Irish side battled to hold their innings together after losing the early wicket of Cecelia Joyce (1). Clare Shillington (14 off 15 balls; two fours) and Gaby Lewis (26 off 30 balls; four fours) gave Ireland early hopes of setting a foundation, but wickets fell too regularly and at crucial times for Ireland to establish any further partnerships of note.

A late-order flurry of runs by Eimear Richardson (23 off 19 balls; three fours) was the only batting highlight in the latter overs, as Bangladesh cleaned up the tail, dismissing Ireland for 97 off 18.4 overs.

The undoubted star for Bangladesh was the bowling of 28-year old Panna Ghosh who took 5-16 from four overs – the best ever bowling figures in Bangladesh Women’s T20 Internationals, and only the second time a Bangladeshi bowler had taken 5 wickets in an innings in this form of the game. She was unsurprisingly named Player of the Match for this Final-winning performance.

In positive news for Ireland, Clare Shillington was named ICC Player of the Tournament (see). This is a tremendous recognition of Clare’s batting performances throughout the tournament, which routinely put Ireland in great positions when batting.

Despite the result, both Ireland and Bangladesh progress to the ICC Women’s World T20 tournament in the Caribbean (9-24 November 2018).