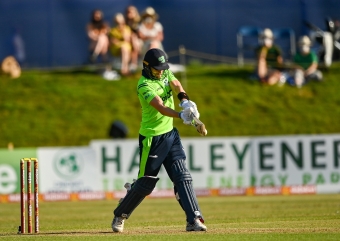 Barry McCarthy on his way to 30* on Monday

BELFAST – Ahead of the final training session at Stormont before tomorrow’s second T20 International against South Africa, paceman Barry McCarthy sat down to talk about the takeaways from first match, enjoying the return of spectators to games and hopes his batting performance on Monday can be the platform for improved and more consistent performances over coming years.

McCarthy, 28, was playing in his 50th match for Ireland (across formats), having made his international debut in 2016 at the same ground of Malahide. That day with the bat, McCarthy was out without scoring, but last Monday he hit his highest international score of 30* from 25 balls, and he hopes that innings can be a platform to greater contributions with the bat in the future:

“Obviously it was very disappointing to lose the game, but myself and Josh [Little] managed to bring the result a little bit closer than it probably looked at one stage. From my perspective, I enjoy batting and probably annoy the coaches to squeeze me in for a couple of throw-downs at the end of training sessions.”

“It was nice to get a couple of runs the other day, but I’d like to make a more regular contribution with the bat - and in closer matches, not just when perhaps the game is away from us. I’d like to think that it could become a platform for me to score more runs on a more consistent basis for the team. Personally, I’ve been disappointed with my batting, but I’d now like to kick on and be seen as someone who can be relied upon for a few valuable runs at the end of an innings.”

The unbeaten 44-run 10th wicket stand was a record in T20I cricket for a Full Member side – so what did he and Josh talk about in the middle?

“I said to Josh - let’s have a bit of fun here. We were dead and buried in a game recently for Leinster Lightning versus Northern Knights, and the two of us put on 55, so we agreed we’d play like that again - to play our shots and see what would happen. I knew we’d get a couple of short balls, so told him just to be wary of that, but Josh has also come on leaps and bounds with the bat, he’s worked hard on it during the winter. He had an injury with his elbow at that time, so he worked hard on his batting and that has shown too - not just in this last game, but at a couple of inter-pro games as well. I’m sure he’s in the same boat as myself, in that he’d like to make more contributions with the bat as well.”

How does he reflect on the first T20 International of the series?

“I thought we did well in parts. It’s obviously a crucial time in the powerplays against these types of teams - and that’s going to be a key theme in pretty much every T20 we play in the lead up to the world cup in October. How well you do in the powerplays, either with bat or ball, is crucial. If you can come out of them level or better, then the rest of the game is a level playing field.”

“In the last few weeks we’ve shown what we can do in the back end of an innings with accumulating valuable runs, and to get three wickets in the powerplay with the ball was nice, but the batting powerplay just didn’t go the way we wanted it to. We certainly showed the intent that we’ll need to do to compete against the best in the world, but it just wasn’t our day.”

And it must be good to be back playing in front of spectators again?

“It’s certainly nice to be back in front of an albeit small crowd. But just that crowd alone, you can almost feel the energy a little bit more - and the noise levels were high.”

“I remember being at the Rose Bowl last year and watching the winning runs be hit against England, and I think there were four paramedics and four groundsmen just clapping in the corner. Then two minutes later the lights went off and we were heading off back to our hotel rooms to enjoy the win, which was quite surreal. So, it was really memorable to win that game the other day in front of a crowd and to be able to enjoy it with them. Hopefully, as things start easing off we can get more people in to watch games.”

The second T20 International between Ireland Men and South Africa Men begins tomorrow at 4pm, with South Africa leading 1-0 in the three-match series.