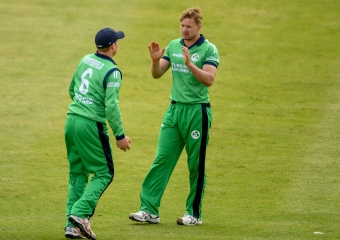 Barry McCarthy has impressed with the ball...and bat, on this tour

ST. GEORGE’S, Grenada – Leinster Lightning paceman Barry McCarthy knows you need to grab your chance when it comes – and he grabbed it with both hands during the recent One-Day International series against West Indies. After a recovery day yesterday, and a shortened training session today due to local showers, McCarthy is keen to show his hard work and preparation behind-the-scenes will continue to deliver results on the field.

Dublin-born McCarthy, 27, spent four seasons at English county side Durham making 20 first-class appearances, before returning to Ireland to play for club side Pembroke and pursue his international career. He made his debut for Ireland and has made 38 appearances in the green. Despite taking 68 international wickets so far, he admits that he has had to work hard in training and at domestic level to earn his international caps.

Speaking during a rain delay at training, he said:

“It was a rewarding moment when I was picked in the playing 11 for the first game of the series here. I’ve been out of the side a while, but I feel I’ve worked hard and it was nice to be given the opportunity from the start of the series.”

“With Murts [Tim Murtagh] retiring from the international game, it was evident that there would be an opportunity for someone else to get a go, and I’m grateful that I was given the opportunity. However, it’s only a start and I’ll continue to work on all aspects of my game and try and lock down that slot.”

McCarthy claimed four wickets during the ODI series, leading the line during the first powerplay overs. His best return was the 2-28 from 10 overs during the nail-biting second ODI, but admits conditions were trying on the Irish side:

“It was pretty draining to be honest. 50-over cricket in this heat takes its toll on the body - both physically and mentally - but it’s a sign that we all gave 100% in every game. It was a good run out certainly. We want to play more cricket at this level, and although we didn’t win a game in the series, we showed that with more exposure we can certainly compete with these leading nations.”

“While it can be challenging playing away from home in foreign conditions, as a bowling unit we worked on altering our lengths back home to cope with these surfaces, and I think we showed some good discipline.”

“Moving into the T20 series, it’s going to be about reading the situation and knowing what the surface has to offer. T20 cricket can be carnage, so it’s important that we quickly assess conditions on the day, and whether it’s best to keep it simple and just smash out a length, or whether variations and slower balls can be more effective.”

Ireland’s @barrymccarthy2 looking to grab his opportunity in the Caribbean with both hands.

And let’s re-watch his two wickets in the second ODI against the West Indies.#BackingGreen  pic.twitter.com/PjknHZAOI2

While his bowling caught the eye of fans, McCarthy also displayed his skill with the bat when called upon during the series.

“Although it might not look the prettiest, I always try and work on my batting. I’ve had a couple of decent contributions in my career, but I’d like to be a little more consistent going forward. In an ideal world our batting unit would have scored 350 and I wouldn’t have been needed, but it was a good learning experience to be put in those situations. I will continue to work hard and hopefully contribute more frequently with the bat going forward.”

And is he enjoying the Caribbean life?

“I’ve been to a few lovely countries with my cricket, but I think the Caribbean has to be right up there. It was a really special occasion to have my parents here for the Barbados leg of the trip and spend some time with them. It’s just refreshing to be able to wind down on a beach and recover after training or games, and switch off and recharge with some Vitamin D.”