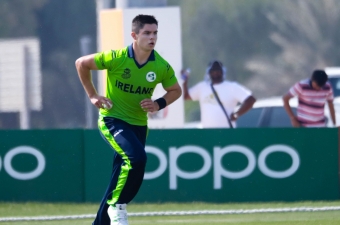 David Delany has been withdrawn with a knee injury

ABU DHABI, UAE – Pace bowler Barry McCarthy flies out today to join the Ireland Men’s cricket team at the T20 World Cup Qualifier tournament after David Delany has been ruled out of the remainder of the tournament due to a knee injury.

21-year old Delany, who made his T20 International debut last month at Malahide, is Ireland’s quickest bowler who was clocked at more than 90 miles per hour (145 kmh) earlier in the week. He had missed the recent Pentangular T20I Series in Oman at the beginning of October due to study commitments, but joined up with the squad on its arrival in Abu Dhabi ahead of the Qualifier tournament.

He had claimed 6 wickets in his five appearances to date in the tournament at an average of 22.33, but he will be missed as much as for the potency of his raw pace, as much as the wickets he took.

Flying in to replace Delany will be Leinster Lightning’s Barry McCarthy. The former Durham player has taken 10 wickets at an average of 25.90 in T20Is, having appeared six times for Ireland in this format, the last occasion against Scotland in June 2018.

“David dived in the field during our game with Jersey and it was clear that he had sustained an injury to his knee. Although he tried to continue on with his overs, he had to stop halfway through his third and came off the field for assessment.”

“He was sent for an MRI scan immediately, which was reported on by ICC recommended radiologists in Abu Dhabi and by our team of radiologists in Dublin, both confirming that he has sustained a meniscal tear in his left knee. He will travel home tomorrow and will see an orthopaedic consultant for an opinion on his ongoing management and rehab.”