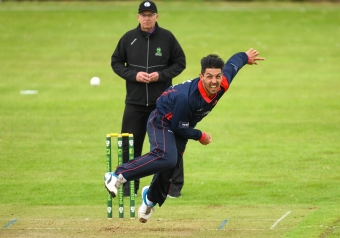 MAGHERAMASON – A well-constructed 48 on debut by Ani Chore saved the Northern Knights blushes against an incisive North West Warriors seam-bowling attack, before a Ruhan Pretorius-inspired batting collapse and rain settled the result in favour of the Knights on Duckworth-Lewis-Stern (DLS) at Bready Cricket Club today.

The northern-based rivals both suffered losses to start their respective Cup campaigns last week, but at the toss each captain spoke about making a positive start on what was a decidedly bowler-friendly pitch under heavy grey skies. With Knights’ captain Mark Adair withdrawing from the clash during the week, it was Paul Stirling who took the Belfast-side’s armband and he was striding out to the crease a few minutes later in his customary opening role.

Early on, the Warriors may have felt inserting the Knights may have been the wrong decision as the in-form Stirling smashed Ryan Macbeth for six over long-off in the second over. However, Stirling’s nonchalant start came to an end on 11 after he was caught off a leading edge in an attempt to whip Macbeth over mid-wicket.

Macbeth struck again shortly after, trapping Pretorius in front for 2, then Graham Hume induced an edge behind from James McCollum without advancing the scoreboard, and the Knights looked shellshocked on 27-3 in the 9th overs. Hume, in particular, was looking to use the conditions to his advantage, bowling a nagging length and finished his first spell with 1-9 from six overs. Debutant Ani Chore, who was named Club Player of the Year at this year’s Irish Cricket Awards, made an impressive start with the bat, playing a sweetly-timed cut shot through point to the boundary. Jeremy Lawlor came and went for 11 – an innings which featured a remarkable whip shot off his pads which sailed over the square leg boundary for six – but Chore looked increasingly comfortable as his innings progressed. However, as assured as Chore looked, the opposite was the case with his procession of Knights’ partners.

Morgan Topping (3), Ross Adair (14) and Matthew Humphreys (0) were soon back in the pavilion, with the Warriors seam attack hitting their mark and exploiting home conditions beautifully. Josh Manley (10) offered some support for Chore with a 31-run stand for the 8th wicket, but in the shadow of what would have been a commendable half-century on debut, it was Chore who played across the line and Graham Hume struck with his fourth wicket.

Hume finished his outstanding spell of bowling with 4-18 from his 10 overs, and was well supported by fellow seamer Macbeth (3-29) and a tight bowling display by Andy McBrine (1-16 from 7.5 overs). When McBrine trapped Matthew Foster in front for 0, the Knights innings came to a close with 123 all out from 44.5 overs.

In response, the Warriors lost Stephen Doheny early for 2 – bowled by a ball that angled in from Pretorius – but William Porterfield (13) and McBrine (15) looked to eliminate any nerves within the Warriors batting camp as they put on 33 for the second wicket. However, despite the experienced duo looking set, both batters fell in consecutive overs triggering a middle-order collapse. The Warriors lost 4-17 in nine overs as the momentum of the match swung dramatically towards the Knights.

With William McClintock on 12* and Hume 0*, and the Warriors behind on DLS, down came the rain and the players departed the field. Unfortunately, they did not to return after showers persisted. Pretorius was named Player of the Match for his 3-21 from 10 overs – bowling his 10 overs straight, capturing key wickets of Doheny, McBrine and Graham Kennedy and including two maidens to keep the pressure on the Warriors.

Hear from Player of the Match Ruhan Pretorius: