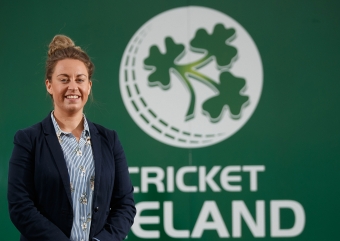 Ms Healy is an Events Manager in Pioneer Group, specialising in sports events management and consultancy. She has gained extensive experience in delivering successful and significant sporting events across the UK and Ireland, and was most recently Games Team Manager for the Northern Ireland Commonwealth Games Council (NICGC) for the Gold Coast Commonwealth Games 2018.

She will continue to work part-time with Pioneer Group, while taking on the new role with the Ireland Women’s team, and will work under Head Coach Aaron Hamilton in the international squad structure.

“I am delighted to be appointed as Team Operations Manager of the Ireland Women’s team. This is an exciting opportunity for me and I am looking forward to working with the staff and players as we strive towards achieving further success for the team.”

“Beth was an outstanding candidate and we believe will bring enormous talent and experience to this role. As we move into the era of women’s cricket professionalism and a greater schedule of fixtures both home and abroad, the role of Team Manager will become even more crucial to the effective management of the senior squad.”

“We welcome Beth to Cricket Ireland and wish her well in her new role.”