Bhavi Devchand returns to the Arachas Super Series for 2022 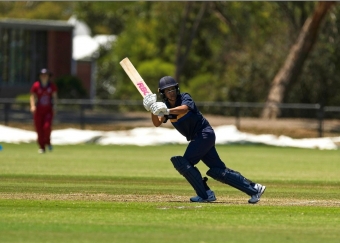 DUBLIN – Arachas Super Series side the Scorchers have welcomed back Zimbabwean-born Australian Bhavi Devchand as their overseas player for the 2022 season. Devchand was part of the Scorchers squad that finished second behind the Dragons in 2019.

Devchand plays for Victoria in the Women’s National Cricket League (WNCL), and also represented the Melbourne Stars in the Women’s Big Bash League (WBBL) in 2020 in Australia.

The leg-spinning allrounder also spent a year both playing, and coaching with English County Championship side Gloucestershire in 2016.

She is also the host of a very successful cricket podcast called ‘The Inside Edge’, where she speaks to elite athletes and coaches to analyse the arena and psychology of high performance and the highs and lows that come with pursuing potential.

Devchand is looking forward to getting back in alongside the rest of the Scorchers players:

“I’m really excited to be back in Ireland and I’m looking forward to the opportunity to once again play for the Scorchers. The last time I was here was three years ago - it’s brilliant to see how far the female game has come since then.
“It’s very clear to see the improvements in the Super Series competition since I played in 2019. The teams are training as elite cricketers now, preparing well and it will be a hugely competitive series. From my point of view, I’m very grateful to have the opportunity to be part of an elite set up again and will do my best to be present and simply enjoy what that brings. I’m really excited for the season ahead and the opportunity to challenge myself along with some of the best cricketers in Ireland.

“I’ve met the Scorchers head coach Glenn (Querl) briefly; however we are yet to have a full conversation about my role in the team and the expectations required. I’m really passionate about coaching and performance, so it will be great to learn from Glenn and see how he goes about his business.”

The 29 year-old can’t wait to get started, and is excited to link up with a couple of players that she knows well:

“One of the best parts of playing overseas is getting to meet new people and learn from them, so I’m certainly looking forward to getting to know my new team-mates. There are so many experienced players to learn from and hopefully I can also give back and help some of the younger players coming through and keep growing on and off the field. I’m also very excited to play alongside Gaby Lewis and Rachel Delaney, as I’ve spent some time with them in Australia, however, we’ve never had the opportunity to play on the same team.”