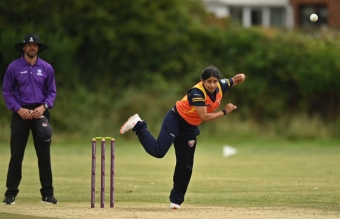 LURGAN – After taking 4-44 with the ball earlier in the game Bhavi Devchand followed that up with a stylish century with the bat, only the ninth in the competition’s history, as the Scorchers took victory in their final game of the season in Lurgan.

Fresh off their title-sealing victory over the Typhoons on Wednesday, the Scorchers showed just why they are back-to-back winners in both formats as they eased to a comfortable win over the Dragons.

It was yet another top bowling performance by Bhavi Devchand, taking 4-44 in her 10-over spell. The all-rounder also took a catch and had a run out in what was an excellent all-round display.

After being set a competitive target of 223 to win, the Scorchers openers Devchand and Rachel Delaney set about the challenge with gusto. Devchand reached her half-century in 49 balls, looking very comfortable on what was a quite tricky batting surface.

The pair had put on 87 runs before Delaney (26) was bowled by Cara Murray in the 15th over.

Murray struck again four balls later, when a beautiful delivery removed Christina Coulter Reilly for 0 – the flighted legspinner caught the outside of the bat and presented keeper Ali Cowan with a straightforward catch.

Shauna Kavanagh came to join Devchand in the middle and between them they went on to score the highest partnership of the day, with 93-runs.

Devchand brought up her first-ever Super Series century in the 23rd over, clipping one away for four off Arlene Kelly. However, Kelly gained her revenge shortly after when Devchand snatched at one and was caught behind on 112.

From there it was a comfortable chase, with Kavanagh and Rachel Thomas combining well for a 43-run stand, with Thomas scoring the winning runs in the 32nd over.

Earlier in the day Dragons captain Leah Paul opened the batting alongside Sarah Forbes and proceeded to find the boundaries with ease, racing away to score a quick-fire 22, before she was bowled by Devchand in the eighth over. Their innings appeared to unravel after that as the aforementioned Forbes (7) and Amy Caulfield (8) fell cheaply.

Alana Dalzell and Arlene Kelly came together and stabilised the innings, putting on a 34-run partnership for the fourth wicket. However, the return of Devchand back into the attack in the 22nd over saw the partnership broken. A flighted full toss tempted Dalzell out of the crease, but she completely miss the ball and keeper Shauna Kavanagh had no problem completing the stumping.

Kelly was looking increasingly confident in the middle, and brought up her fifty up in the 33rd when smashing one over mid-off to the boundary. Cara Murray took on a supporting role, and the pair put on a 77-run partnership, but just as they were set to launch the run-rate in the latter overs, a wonderful catch from Ellie McGee saw Kelly heading back to the pavilion for 72.

The final game of the 2022 Arachas Super Series takes place on Wednesday 10 August in Clontarf.