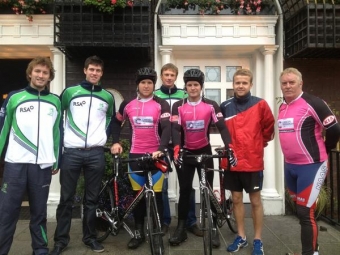 John Kenny from RTE joined the boys on Day 2

Gary and William took the second day of their Big Bike Ride in stride as they completed the 70 miles from Kilkenny to Dublin with aplomb and they were helped along the way by some guests and team-mates.

The journey from Kilkenny to Dublin saw them travel along first the N78 before linking up with the N81 as they traversed the old road away from the M9. They were met along the way by George Dockrell and Pete Johnston who joined the boys and the support car as they drove alongside the lads to Dublin as well as John Kenny from RTE who was more adventurous and donned the lycra to join up with the bicyclers!

Their final destination in Dublin was Harcourt Street and the the boys then completed their day by being guests of honour at the Cricket Writers of Ireland Awards Dinner in Malahide Cricket Club. Very generously the organisers decided to donate all of the raffle money of the evening to the Big Bike Ride fund further increasing money raised and keeping the momentum going for the boys.

Gary again spoke to Surrey Cricket at the end of Day 2.