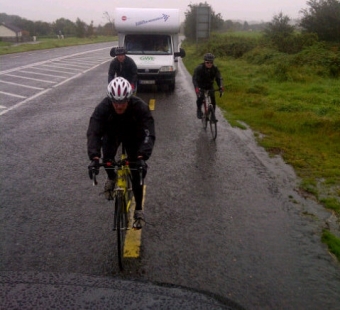 John Mooney joined the lads in brutal weather on Day 3

A report on the lads travels on Day 3 of the Big Bike Ride where the starting point was Dublin with the destination being Armagh.

If there was ever going to be a ‘hump’ in this journey it was probably Day 3 of the Big Bike Ride, where Gary and William faced the daunting 90 mile journey from Dublin to Armagh that took in all of the challenges that come with the Mourne Mountains.

The lads were given a big boost throughout the day as team-mate John Mooney joined them for the duration of Day 3 of the Bike Ride. They included a stop-off in John’s former school, Balrothery National School where all three were given a heroes welcome and a fantastic donation of €600 from the pupils and staff of the school.

If that was the high-point of the day, there was plenty of lows as truly horrendous downpours of rain followed the party throughout the day. That wasn’t it though; three punctures, sweeping wind, more rain and the huge climbs of the Mourne Mountains combined to provide further tests for the three lads but it couldn’t stop them! Shortly after 6pm, they all arrived safely in good spirits although completely exhausted in Armagh.

Once again Gary chatted to Surrey Cricket at the end of the day. Day 4 journey the Big Bike Ride move on to their next stop of Bready Cricket Club. Running repairs were needed all day!