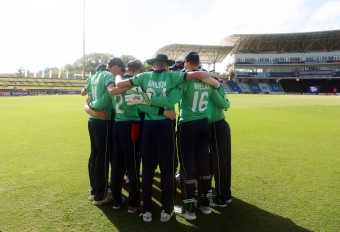 Ireland will likely finish third in Group B

With confidence in their batting unit, the South Africans won the toss and elected to bat first. However, it was Ireland who had the better of the early exchanges predominantly through the bowling of 15-year old Reuben Wilson. The YMCA pace bowler removed opener Valintine Kitime for 0 in the first over, and bowled with a nagging line and length that troubled the South African top-order.

South Africa soon found themselves at 16-2 in the 4th over after Liam Doherty chimed in dismissing Ethan-John Cunningham (11), but the in-form Dewald Brevis decided that attack was the best form of defence. The South African batter, who had scored 64 and 104 in his last two Group Stage matches, shared a 47-run third-wicket stand with Gerhardus Maree (14) – who was bowled by a beautiful in-swinger from Wilson – and then combined for a 118-run stand with his captain George van Heerden.

Brevis hit 7 fours and 4 sixes in his innings, falling four runs short of his century, caught seeking to bring up his second ton on the trot.

van Heerden wasn’t deterred by the loss of Brevis – he continued to attack the bowling, smashing 8 maximums in his spectacular 111 off 93 balls. He found support from Andile Simelane (25 off 12 balls) and Mickey Copeland (43 off 18 balls), as the South African total passed the 300-mark, finishing on 315-7 from 47 overs (with three overs lost to rain delays).

Facing an adjusted target of 312, Ireland lost Liam Doherty first ball – nicking off to an seaming delivery on a good length, followed soon after by Josh Cox (0) and Tim Tector (1).

Rush’s Nathan McGuire – elevated to open in this match - was determined to counter-attack as his partners succumbed to the aggressive South African bowling. He played a range of powerful cuts and drives as he quickly raced to 42 at better than run-a-ball. Looking near-faultless in his shot selection, McGuire finally flashed at a wide ball and was caught at first slip.

Philippe le Roux played stylishly for his 33, and Matthew Humphreys adventurously struck 38 late on, but Ireland were eventually bowled for 158.

Ireland’s next match will likely be against Canada (still to be officially confirmed) at the same venue next Tuesday in the Plate Quarter-Final.

After the match, Tim Tector said:

“It’s not ideal to finish our Group Stage like this, but I think that we can take a lot away from the way South Africa went about their business with the bat, they didn’t give us many chances. Reuben [Wilson] started out really well with the ball today. He is so young, and this experience will be so good for him. So there are a few things we can take from the game, but overall we’re disappointed.”