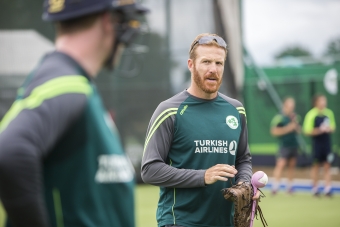 DUBLIN – Rob Cassell, the Australian-born Assistant Coach of Ireland Men’s senior team, believes the future of Irish cricket will be bright after returning to Ireland from the Ireland Wolves tour of Sri Lanka this week.

Working with Cricket Ireland since July 2017, Cassell is a former professional cricketer in Australia, who also held the role of High Performance Bowling Coach at the South Australian Cricket Association for six years before moving to Ireland. He travelled to Sri Lanka as part of the Ireland Wolves management team for the first half of the tour, swapping over with Ireland Men’s Head Coach Graham Ford who flew out for the second half of the tour.

Upon his return to Dublin, Cassell spoke about his role, the Wolves tour and how the Sri Lankan experience will benefit Irish cricket’s future:

“My role is basically the Assistant Coach – Bowling for the senior men’s team and I’m here to support anyone who bowls in our system – this includes the Wolves through to our under-age teams. That is, when time permits,” he said. “This was my first tour to Sri Lanka, and what a wonderful place - such a fanatical cricket country.”

“Our pre-tour preparations started early and involved creating some scenarios for our batters against spin at the indoor centre in North County. We mainly used the Merlyn bowling machine, but it wasn’t easy given that it was about 3 degrees in Dublin and we were using a surface that didn’t spin! The challenge forced us to be creative, and we used mats to make it more ‘subcontinent-like’.”

“In addition to our indoor work, some of our players were fortunate to get some turf practice in - a batting group went to India for a 10-day camp just before Christmas, and a bowling group were able to get some time at the European Cricket Performance Centre in Spain.”

“More specifically with the bowling unit, a lot of our work behind-the-scenes has revolved around the execution of basic skills, and also creating match scenarios. Then once we were in Sri Lanka in match-mode, we focussed on gaining an understanding of local conditions as quickly as possible, and making sure each bowler had simple plans. We wanted each player to be clear and confident in what they were trying to do.”

“With this squad I’ve tried to keep it pretty simple - my philosophy has been that I don’t really mind what your technique is as long as you can execute and get in the contest bowling spin or pace.” Image: “I don’t really mind what your technique is as long as you can execute and get in the contest” - Rob Cassell


“It has been a big challenge in conditions that are foreign to us, but we’ve definitely seen some big improvements individually. James Cameron-Dow and JJ Garth have developed and have learned the importance of bowling the right length and pace in subcontinent conditions.”

“Another area of improvement has been some of the small things within a game - like making sure the fielders are in exactly the right position. Just a couple of metres left or right can make a big difference to a batter’s mindset. This knowledge, though, only comes from experience – and this tour is giving some of these young players that experience.”

“Like on any long tour, it’s never easy to keep all the players on the park. In Sri Lanka the coaches and physios have been routinely discussing what each player needs on a daily basis, and priming them for matches. The mental side of touring is also massive, and with the Wolves it has been about making sure that this young squad of players are up and about and enjoying themselves.”

Cassell may be back home, but has already moved on to his next challenge - finalising plans for the senior men’s tour to Oman in early February, immediately followed by a nine-match, multi-format series against Afghanistan in India.

About the Ireland Wolves


The Ireland Wolves team was created in 2017 to bridge the gap between domestic first class and international cricket. The squad recently completed an eight-match series against Bangladesh A in Ireland, which followed on from a tour to Bangladesh made by the Wolves in 2017.