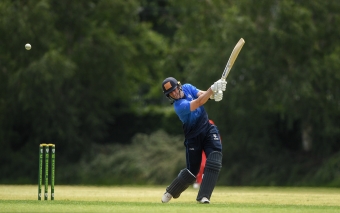 George Dockrell leads the charge to victory in Game 1

DUBLIN – Leinster Lightning signalled their intent to dominate the Inter-Provincial T20 Trophy by convincingly beating Munster Reds in the morning match at Pembroke, but the North West Warriors responded in kind by dispatching the Northern Knights in the second match of the day.

After being sent in to bat first, the Munster Reds batters looked composed early with Jack Carty (31) and PJ Moor (18) putting on a sprightly 38-run opening stand in 34 balls. Murray Commins then took control of the innings and carried his batting form from the 50-over game into the T20 format today with an impressive 51 from 34 balls - striking 3 fours and 3 sixes in his 56-minute stay at the crease. Commins is the third-highest run scorer in the 50-over Cup competition with 227 runs at an average of 56.75 and again impressed onlookers with his composure and shot selection.

Reds captain Tyrone Kane hit a quickfire 20, but a rash of late wickets slowed the Munster side’s momentum, and they ended with 148-7 from 20 overs.

While the wickets were shared, David O’Halloran, the 20-year old tall paceman from Malahide, impressed the 100-strong crowd taking 2-20 from his four overs, generating additional bounce and causing the Reds batters a moments of concern on a largely batting-friendly pitch.

In response, the Lightning lost Kevin O’Brien early (on a momentous news day about the Irish legend), but Player of the Match Simi Singh (44) and Andrew Balbirnie (20) steadied the ship with a 49-run stand. Singh was looking impressive, and took 22 runs off the first five balls of Fionn Hand’s first over, but on the last ball of the over he struck a hard low ball back down the pitch, and Hand – moving in the opposite direction – stuck out a hand and held on to a spectacular catch.

When Balbirnie fell shortly after, the Reds sniffed an outside chance given the Lightning’s longer than usual tail, however, the form batter of the season George Dockrell (48*) and Lorcan Tucker (28*) took the game away in a rush hitting the last 73 runs in 37 balls to complete a 7 wicket win with 29 balls to spare.

In the second game of the day, the Northern Knights struggled early despite a sparkling 48 from 37 balls from opener James McCollum. After an initial opening stand of 41 by McCollum and Luke Georgeson, five wickets fell for 35 runs as the North West Warriors bowlers wrestled back control of the match.

Graham Hume grabbed two wickets, but it was the spinners Graham Kennedy (2-21) and Ross Allen (1-15) that caused the most trouble at times.

A late flourish by Graeme McCarter (15) and Ben White (8) added 22 for the last wicket off two overs, but the Knights 134-9 never looked enough on a pitch that was playing true for the batters.

The Warriors batters - given the licence to express themselves by head coach Gary Wilson - made light work of the run chase. Through a combination of power hitting and a dynamic shot selection the men from the North West romped home in 11.1 overs.

Player of the Match Stephen Doheny led the charge with 54 off 27 balls (including 2 sixes and 8 fours), supported well by Shane Getkate who hit 36 from 13 balls, with cameos from William Porterfield (15), Nathan McGuire (14) and - for the second match in a row – William McClintock brought up the winning runs with a six.