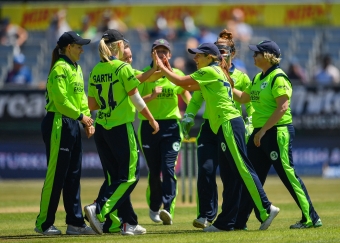 DUNDALK – The Board of Cricket Ireland has endorsed recommendations and funding for the development of a new strategy for girl’s and women’s cricket in Ireland and an increase in white-ball fixtures in the Inter-Provincial Series in 2019, at its recent Board Meeting held at Ballymascanlon House Hotel on 12 December 2018.

The Board began by acknowledging the performance at the World T20 tournament by the women’s international team. While results did not go Ireland’s way, the Board felt that many individual performances deserved recognition. The Board also acknowledged the retirements of Clare Shillington, Isobel Joyce, Cecelia Joyce and Ciara Metcalfe all of whom have made outstanding contributions to the game in general, but particularly to the women’s game and expressed a hope that each of the players will remain involved in the game in coaching, administrative or other capacity.

The Board wholeheartedly endorsed the funding and development of a strategy for women’s and girl’s that will look at all aspects of female involvement Irish cricket, on and off the field of play.

“As part of our commitments to growing the sport, the Board has endorsed the development of a strategy to grow involvement and improve performance standards within the game, in all areas and levels. With the expansion to 10 teams of the ICC Women’s Championship post-2021 and ICC applying for a women’s competition in the Commonwealth Games from 2022 onwards, the Board agreed we need to be as well positioned as possible to grasp the sport’s increasing opportunities. While we will be continuing to work on standard targets to improve performance and enhance participation by women and girls, we believe a broader look at female involvement in areas such as officiating, administration and our governance structures is equally important.”

“With such a broad brief – including the need to benchmark with other cricket nations/sports, and to encompass targets set by Governments and ICC – the Board agreed that the engagement of an independent, experienced consultant to develop a framework for the future of this area of our sport was essential. We will be appointing the consultant early in the new year and will begin this important project immediately afterwards.”

“Cricket Ireland would like to thank Sport Ireland, who are supporting this initiative and helping to improve sporting opportunities for women and girls throughout Ireland.”

The Board has confirmed that Ireland Men’s team will become the first-ever Full Member nation to visit and play Oman, as part of a Quadrangular T20I series between Ireland, Oman, Scotland and Netherlands. The squad will play the series in early February 2019 en route to its Afghanistan series in India.

The scheduled fixtures for the Quadrangular tournament are (to be played at Al Amerat Cricket Stadium):

The Board also received an update on the 2019 international fixtures for the Men’s team, which will see 16 home internationals played between May and July, involving five Full Member nations (outlined here). Tickets for the England ODI are on sale already, while tickets for the home Tri-Series will go on sale before Christmas.

“The recommendation of a phased approach to expanding the domestic game was approved. This will ensure we can build the number of playing days for our top and emerging talent, while not diluting the quality and competitiveness of the first-class structure.”

“There is general consensus that more playing days are required, so in 2019 we will be adding another IP50 round to increase 50-over fixtures by 50%. The Board will consider further the T20 format at its February meeting.”

“Given the need to allow more games, to manage venue availability and allow for greater preparation for the national team players ahead of the ODI series in May, the first round of matches will be played in La Manga, Spain in April outside of our regular domestic season.”

“We will obviously keep the Inter-Pros under constant review and plan to have further meetings with our Unions, Cricket Committee and High Performance Committee in coming weeks with regards to the shape of the competition beyond 2019.”

The Board noted significant strides were being made in the ongoing development of Provincial Unions, including discussions around the enhancement of responsibilities around grassroots cricket, future funding models from Cricket Ireland to the Unions, and timelines around future activity. A successful meeting was recently held with ICC Regional Manager for Europe, Ed Shuttleworth, with a follow-up meeting set for early 2019.

The Board noted that a new Safeguarding Information Pack for clubs is being finalised, with an anticipated roll-out in early 2019. The Information Pack, developed following consultation with Provincial Unions and experts within the broader sporting environment, will provide support and advice for clubs in the area of policies and procedures, communication of information, training and education, and quality assurance/compliance.

The Board noted the recent application by the International Cricket Council for women’s T20 cricket to be added to the sports included at the 2022 Games. The Board agreed that Cricket Ireland, with its footprint in Northern Ireland, should maintain involvement in discussions and be supportive of the application at this stage.

• Match Allocation Policy update: the Board reviewed headline recommendations from a joint report by Provincial Union General Managers on the Representative Match allocation policy. It is expected that a new Match Allocation Policy will be put to the Board by mid-2019, and match venue allocations for FTP matches from 2020-2022 will be tabled at the subsequent Board meeting.
• Governance compliance: the Board endorsed all recommendations from management regarding Cricket Ireland becoming fully compliant with the Sport Ireland-endorsed Governance Code by 1 January 2019.
• Media and Social Media: the Board noted a submission to the Board on media and social media performance, noting growth in all areas (including Twitter +31%, Instagram +55%, LinkedIn +129% and website visitation +43%).

Further announcements coming from the Board meeting will be made next week.