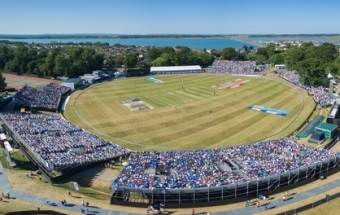 Malahide twice sold out in June 2018

Cricket Ireland Chairman Ross McCollum has declared 2018 the biggest year ever for Irish cricket, but one which the organisation has not shied away from confronting challenges to the game locally and globally.

Speaking after an intensively busy period of international men’s and women’s cricket at home and abroad, Mr McCollum - Chairman of Cricket Ireland since 2012 - said:

“I think any outside observer would consider this a successful season for cricket on this island – hosting our inaugural Test match, two sell-out T20 Internationals against India, release of the Future Tours Programme, the announcement of a Test match at Lord’s in 2019, and a rollercoaster but ultimately positive end to the our women’s international team’s season achieving qualification for the Women’s World T20 in November.”

“Over 30,000 spectators have attended matches to date this season, with the Afghan series in late August still to come. This is a great leap forward in attracting a growing local audience to our game, and ultimately growing participation and support for Irish cricket.”

“Many millions of cricket fans around the world watched the broadcast of our Test and T20Is, and we live-streamed the women’s international between Ireland and Bangladesh as part of a double-header with the men’s 2nd T20I v India at Malahide. Overseas broadcast is an important part of our revenue mix going forward, but the support domestically from RTE and BBC Sport NI in covering our matches on various broadcast platforms was also very significant as part of our ambition to make cricket mainstream in Ireland.”

“However, while the Board of Cricket Ireland welcomes these eye-catching topline results, we are conscious of the need to maximise our resources across both the international and domestic game. Growth and success for the Board is not just an international trophy or tournament qualification – success is seeing an increase in girls and boys take up the sport, greater club membership, increases in the number of schools with cricket programmes and attracting more sponsors and supporters.”

“We endeavour with every Board and Committee Meeting to come away with initiatives and outcomes that will move our sport forward and make our structures more sustainable.”

The Cricket Ireland Board Meeting, held on 20 June 2018 at The Hills Cricket Club, covered a range of subjects and decision-points for cricket in Ireland.

• The Board welcomed the announcement of the ICC’s Future Tours Programme 2018-2023, with Ireland men’s team alone scheduled to play 13 Test matches, 62 one-day internationals and 65 T20 Internationals during this period. However, Cricket Ireland may additionally complement this schedule with other bilateral matches, women’s and well as men’s, while the total number of matches excludes any matches as part of ICC events or qualifying tournaments.

• The Board noted that Ireland would play 10 of the 11 other Full Members during this period, with Australia being the only nation not scheduled to play Ireland. The Board was informed that Cricket Australia had not closed the door on opportunities to play, and further discussions would be held between the two nations in an attempt to find a suitable opportunity.

• The Board additionally received feedback on the sporting, organisational and reputational success of the historic first men’s Test match in May. There was general agreement that the event had been successful both as an occasion to mark our entry into the Test ranks, and in terms of the competitiveness of the team

• The Board received an update on the new Player Eligibility Protocol that was implemented for the 2018 Hanley Energy Inter-Provincial Series. Management reported that the new protocol had not adequately resolved the issue of potential Ireland players achieving game-time in our premier domestic competitions. The Board agreed to a High Performance Committee recommendation to implement a new loan scheme for the 2019 season, which would see Inter-Provincial teams able to negotiate short-term loans on players from other squads.

Richard Holdsworth, Cricket Ireland Performance Director, commented: “It is vitally important that players who the national selectors and our coaches see as having future Ireland potential have the opportunity to develop further by playing in our First Class competition. At times during the season players get injured and become unavailable – the option of loaning a player who is not making the final XI in another Province can aid both parties. Where a Province is very strong and cannot include every squad player, there will now be options for those players to go out on loan to another Province, without being cup-tied. This system has worked well in English county cricket and other countries, and puts the players at the centre, ensuring they get as much high-quality cricket as possible”.

• The Board discussed further improvements to the relationship and administrative resourcing between the national governing body and the Provincial Unions, with a particular emphasis upon sustainability of all parties in a rapid growth phase. The Board noted ongoing work between management and the Unions in crafting a new document that would outline the next stage in the Unions’ organisational development given Ireland’s new status as a Full Member/Test nation.

• The Board also acknowledged the hard-work and dedication of volunteers within the game, not just in supporting high-profile international fixtures, but in the work they do every week at club level.

• The Board acknowledged the ongoing support of governments and sporting authorities in the Republic of Ireland and Northern Ireland in supporting our game and helping it grow in communities around this island. This support has provided Cricket Ireland:

o the ability to create the soon-to-be opened High Performance Centre at Abbotstown; and
o the encouragement to plan for a national cricket stadium in Dublin – a facility that will push this sport forward and help us to compete with the best in international cricket.

The Board received updates from management, and considered a number of other matters, including:

• A full review would be undertaken of the Match Allocation Policy which outlines criteria by which matches are allocated to venues around the country. Management would lead the review with Provincial Union General Managers engaged centrally in the revised future process;

• Both Board and management agreed that the recruitment of a Chief Financial Officer would be a priority to enhance Cricket Ireland’s level of financial planning and management now that the organisation has moved into the Future Tours Programme;

• ESPNCricinfo has been engaged to resume live ball-by-ball coverage of the Hanley Energy Inter-Provincial Series (from 1 July 2018);

• The successful partnership between Cricket Ireland and Tourism Ireland / the IDA during the India T20I series was noted – the partnership demonstrated the perceived value that international cricket can bring to Ireland and the broader economy;

• An update was provided on Cricket Ireland’s progression towards compliance with the new GDPR legislation, with its implications for data management and protection.