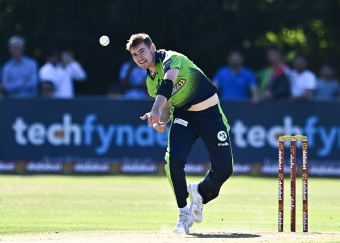 BELFAST - A fine bowling performance set Ireland up for a five-wicket win over Afghanistan to take a 2-0 lead in the five-match T20I series.

The hosts limited to the visitors to 122-8 after 20 overs, with four bowlers taking two wickets apiece to ensure Afghanistan’s batting effort never gathered any serious momentum.

While Ireland briefly tumbled in the middle overs of their chase, falling from 72-1 to 86-4, George Dockrell held his nerve with an unbeaten 19-ball 25 to secure victory.

Mark Adair got the ball rolling after Afghanistan chose to bat first, taking a wicket with the first ball of the second over; Rahmanullah Gurbaz found the hands of Barry McCarthy to depart for 1. Josh Little then bowled Usman Ghani in the next over to leave Afghanistan 20-2.

Ibrahim Zadran was getting going in the powerplay, taking three boundaries off McCarthy’s first over, but Curtis Campher struck from the final ball of the sixth over – Zadran’s flick to the leg-side saw Andrew McBrine sprint in from deep midwicket to take an excellent catch.

Campher switched ends and struck from his next over, accounting for Najibullah Zadran, and Mohammad Nabi was the next man to go – attempting to go big off Gareth Delany’s leg-spin, the Afghanistan captain holed out to Dockrell at long-on for 9.

Afghanistan failed to find much firepower at the end of their innings – just 26 runs came off the last five overs as Little (2-18 off four overs), Adair (2-12 off three) and Delany (2-19 off four) put the finishing touches to a fine display.

Paul Stirling departed early in the chase for 4 to Naveen-ul-Haq, but Andrew Balbirnie – who found form in the first T20I of the series with a half-century – rattled along, driving Rashid Khan through the covers for to move to 18 in the fifth over of the innings. He later swept Mujeeb Ur Rahman for six, but the Afghanistan spinner eventually got his revenge, dismissing Balbirnie for 46 off 36 balls to leave Ireland 72-2.

Then came a bit of trouble for the Irish, with Mohammad Nabi striking twice in the 14th over, Harry Tector (5) and Lorcan Tucker (27) both sent on their way.

But Dockrell eased any nerves, keeping calm even as Campher was dismissed for 7 in the 17th over. Victory was sealed with the final ball of the 19th over, Fazalhaq Farooqi deposited for six to give Ireland their second win of the week.