Bowlers put Ireland in the hunt, but Afghanistan come out on top in first ODI 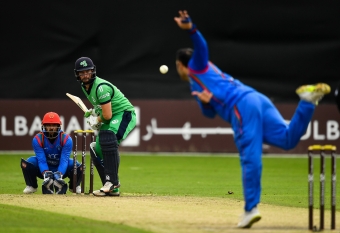 Afghanistan goes 1-0 up in the three match series

The Ireland Men’s cricket team fought hard to restrict a rampant Afghanistan batting attack, but a lack of substantial partnerships and world-class bowling saw the visiting side prevail in today’s first one-day international at Stormont.

Unlike the two completed T20Is last week, Ireland’s bowlers were able to remove the dangerous Hazratullah Zazai early, with Boyd Rankin surprising the batsman with extra bounce and he popped the ball up to Simi Singh. Zazai had been named Player of the Series for his two innings last week in the T20 format, and looked again to threaten the attack but his early capture gave the Irish bowlers a boost.

Afghan middle-order batsman Gulbadin Naib top-scored with a well-controlled innings of 64 from 98 balls (6 x fours) and was well supported by a stylish half-century by Hashmatullah Shahidi (54 runs from 82 balls; 3 x fours). Despite a flurry of shots from the captain Asghar Afghan (25 runs from 23 balls; 1 x four, 1 x six), the Irish bowlers could be relatively satisfied with how they controlled the innings.

Rankin bowled with pace and wasn’t afraid of using his additional height to great effect, claiming three scalps in his spell of 3-44 from 10 overs. However, the stand-out bowler of the innings was the returning Tim Murtagh. The 37-year old Middlesex paceman bowled with accuracy and variation, inducing false shots and taking a career best 4-31 from 10 overs.

Another stand-out performance of note was the outfield catching of Andrew Balbirnie who claimed four catches – an Irish record for outfield catches in an ODI.

Needing 228 for victory, Ireland lost openers Porterfield (16) and Stirling (10) before Andrew Balbirnie and Niall O’Brien set about re-establishing control of the innings, until a piece of brilliant fielding and a slight mix up in the call led to O’Brien’s dismissal, run out for 11.

Balbirnie was the lynchpin for Ireland and the batsman that Ireland needed to build the innings around. His 55 from 82 balls was assured but his demise signalled the turning of the match.

Despite Gary Wilson’s 38 (50 balls; 1 x six) at the death, Ireland could not consolidate a partnership and the regular fall of wickets put upward pressure on the run rate required.

Eventually, Ireland was bowled out for 198, losing by 29 runs.

After the match Tim Murtagh said:

“It was a shame – at halfway we’d given ourselves a good chance. We started a bit slow in the field, but our bowlers - to claw it back and restrict them to 228 - was a pretty good effort. We felt we were in the game at that stage and felt pretty confident. Obviously it didn’t our way and it’s disappointing but we’re going to have to come back Wednesday.”

“They played pretty well in the middle, the two lads who got fifties looked like they were setting up a platform, and we know they’ve got dangerous guys who can whack the ball at the death, but we held our nerve pretty well I think – maybe we got a bit lucky in the end with a few leading edges spooning up to cover, but pretty god effort from the 20 over mark onwards I thought. We would’ve taken that at the start of the game.”

“A total like that was only really one really good partnership that would have sealed it for us, unfortunately we couldn’t do that. We needed one of those partnerships to kick on and someone to score 70 or 80 and other guys to play around him.”

“The wicket was a little bit sticky, in terms of the ball wasn’t coming onto the bat. It didn’t do much off the seam or swing much, I don’t think it even spun massively later in the game, and we were happy with where we were at halfway. We knew we still had to play well because they’ve a couple of really good spinners, but we were confident we could have chased it down.”

“They’ve obviously got a world-class bowler in Rashid, and Mujeeb is probably not that far behind him, I think those two are the main difference between the teams. So as bowlers, we’ve got to help the batters out by restricting the opposition as much as we can.”

“It’s good to be back with the boys – I haven’t seen them since the Test Match [in May], so it’s been strange having a chunk of time not being over here, but its been god to get back in amongst them and get some wickets.”

Ireland and Afghanistan will return to Stormont on Wednesday for the second of three ODIs in the current series.