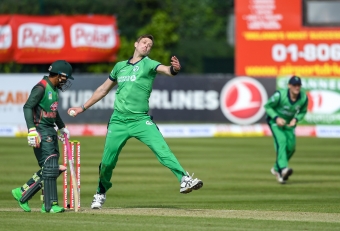 Almost 18 years after Boyd Rankin’s debut for Ireland, the legendary 6’8” paceman - who is one of only 15 players to in cricket history to represent two countries at Test cricket - has announced his retirement from international and inter-provincial cricket immediately.

The 36-year old seamer made his international debut for Ireland in 2003 at the age of 19 against the Free Foresters. He went on to play 153 times for Ireland between 2003 and 2020 in two stints, separated by a three-year period playing for England during which time he made his Test debut in an Ashes Test against Australia in 2014.

Renowned for the natural bounce he could extract out of any pitch, and ability to swing the ball both ways, Rankin claimed 229 wickets at 23.39 apiece for Ireland – finishing his career as the eighth highest Irish wicket-taker at international level. His two most productive wicket-taking seasons were 2018 and 2019 with 30 and 47 wickets respectively, showing his enduring value to his national side over recent campaigns.

Amongst his wickets, perhaps his most memorable scalp was in 2018 when he claimed the first-ever wicket for Ireland in men’s Test cricket at Malahide against Pakistan. However, equally up in the career highlights were also the three wickets he claimed against the same opponents at the 2007 Cricket World Cup as part of that seminal Irish victory.

Rankin also had a successful 15-year career in English county cricket playing with several sides, but most notably an 11-year stint at Warwickshire County Cricket Club.

“To retire from international cricket is always a tough call, but I feel now is the right time to step away. I have put my heart and soul into playing cricket professionally since 2003 and have loved every minute of it. I never dreamt I would play for Ireland as much as I did and to travel the world playing in numerous World Cups and to pull on the Irish jersey is something I will never forget. To have also a long career in county cricket especially during my 11-year stint with Warwickshire where we won the County Championship, 50-over competition twice and the T20 Blast in 2014 was very special and something I am very grateful for. I always strived to be the best player I could be and to play at the highest level possible, so to make my Test debut for England during a time when Ireland wasn’t a Test-playing nation was a very proud moment. I will miss all the guys I played alongside the most and enjoying the wins we had along the way.”

“There are many people to thank for helping me on this journey, firstly my parents for introducing me to the game and taking me to practice and games as a kid growing up, and for supporting me throughout my career. Also to my partner Anna who has helped and supported me for the last part of my career. There are various coaches that have helped me along the way - Brían O’Rourke in my younger years with Ireland underage teams, Mike Hendrick during my time at Derbyshire and Ireland helped me in my early years to become the bowler I became, Adi Birrell for giving me the opportunity during the 2007 World Cup, as well as Phil Simmons, John Bracewell and Graham Ford over my Ireland career. Ashley Giles, Dougie Brown, Allan Donald and Graeme Welch also had a massive influence on me at Warwickshire, and I thank them for all their help and guidance. It’s hard to single out individual coaches but all those guys all deserve a mention.”

“My best memories and achievements that stick out for me would be the World Cup wins - in 2007 World Cup beating Pakistan and Bangladesh to put Irish cricket on the world map, and the 2011 win against England. Being part of the team to play Ireland’s first men’s Test match was a special moment, as well as taking Ireland’s first Test wicket.”

“Finally, thank you for the support from everyone involved in Irish cricket - the support has been amazing over the years and to see all the supporters in the stands cheering the boys in green on during games all around the world has been our 12th Man! I hope cricket in Ireland continues to grow and I wish Fordy, Andy and the players well for the future.” “Unfortunately Father Time catches up with all cricketers. Sadly it is now Boyd’s time, but he can be so proud of his brilliant career and all of what he has achieved in the game. During my involvement with Cricket Ireland, he has been an ultimate professional, shown great courage while bowling through body niggles and put in many high impact performances. I sincerely wish him a highly successful and exciting next life chapter.”

“I had the pleasure of playing with Boyd for a number of years. He was a great man to have on your team – certainly, better to have him with you than playing against you, as we found out a couple of times when he went to play for England. He deserves all the plaudits he is going to get from the cricket community right across the world, and I’d just like to congratulate him on what has been a fantastic career. It’s been a career which he should be very proud of, and one which every Irish cricket fan should be proud of him for.”

“I hope we haven’t seen the last of him in North West Warriors colours, hopefully he’ll be able to help the boys as and when his time allows it, but for now he should just enjoy retirement with the family, get the feet up and enjoy a rest.”

“On behalf of the management and staff of Cricket Ireland I’d like to thank Boyd for his many years of service to Irish cricket. While Irish cricket fans will have many memories of Boyd in action, certainly the proudest moment for me was when he induced an edge from Azhar Ali that flew to William Porterfield to claim Ireland Men’s first-ever Test wicket. The excitement on the face of Boyd said it all, and showed how much playing for Ireland meant to him.”

“Boyd should rightly be proud of a stellar career that saw him play at the highest levels of the game for so long and as the stats show, he was getting better with age. He has played a part in many legendary matches for the boys in green, and he was always a professional yet highly personable player to work with.”

“We all wish Boyd well in his next steps and know that he will continue to actively support the lads from the other side of the fence.”