Boyd Rankin Ruled Out of Tour 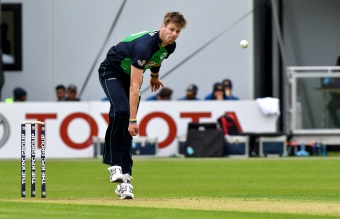 Boyd Rankin has been ruled out of the remainder of Ireland’s tour of India after he failed to recover from the lower back issue that has prevented him playing any part in the ongoing series with Afghanistan.

Rankin was ruled out of the Twenty20 series early in the tour and it was hoped he would recover in time for the ODI series and InterContinental Cup fixture, all of which are taking place in Greater Noida.  Despite making great progress, Ireland’s medical staff ruled he would not be fit enough to play a part after a fitness test on Saturday.

Peter Chase, who has impressed in the first two ODI’s after being named as cover for Rankin, will remain in India and, pending approval from the ICC, officially replace Rankin in Ireland’s InterContinental Cup squad.

John Bracewell said of the news; “Obviously it’s disappointing not to have Boyd fit for these games, but Peter Chase has been with us for the whole tour so far and has shown in the first three ODI’s he is capable of using his height in the same way Boyd does to generate bounce from an awkward length.”