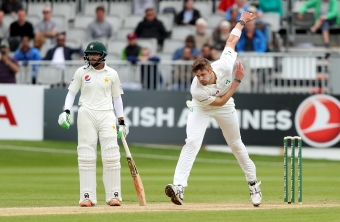 DUBLIN – Ireland’s Test dual-international Boyd Rankin is set to provide a major boost to the Inter-Provincial Series when he begins his first full season in the competition playing for the North West Warriors in 2019, after officially ending a successful 11-year stint at Warwickshire County Cricket Club.

“While Boyd will continue to reside in England for the time being, he has been awarded a full-time contract with Cricket Ireland and will join the North West Warriors in the squad for the full 2019 season and beyond. It is always a boost for Irish domestic cricket when one of our leading stars returns to play at home, and I expect the news will be a major boost to the Warriors.”

The 6’8” fast-bowler first played for Ireland in 2003 and was part of the 2007 World Cup campaign in the Caribbean. In 2012, he declared for England playing in all three formats, before returning to play for Ireland in 2016. In 2018, Rankin received approval to appear for the North West Warriors in a three-day game against Leinster Lightning as part of the lead-up to Ireland’s historic first men’s Test match, taking four wickets in the game.

Rankin said: “I’ve really enjoyed my time at Warwickshire and it’s been fantastic to be part of a squad that has won trophies in every format. Although I am excited about the future, it is still a sad occasion to officially leave Warwickshire – it’s been a great decade at Edgbaston and I have enjoyed both the on-field challenge and the opportunity to play with so many world-class cricketers.”

“Saying that, the very fact that there is now a professional, high-quality domestic cricket structure to move to in Ireland means that I can move on to the next stage of my career in the knowledge that I can continue playing the sport I love, and turning out to play for the men in green. My brief experience in the Inter-Pros last year gave me a taste of the quality of the cricket, and I’m looking forward to contributing to my first full-season in Irish domestic cricket in over 15 years.”

The full schedule of the 2019 Inter-Provincial Series is due to be released in February, and foreshadows another big year ahead for Irish cricket.