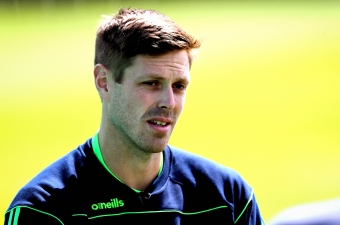 Boyd Rankin is now the senior bowler for Ireland

Rankin, 35, is now Ireland’s most experienced member of the bowling unit following the international retirement of Tim Murtagh in late 2019, and he feels that the status is less a burden, more an opportunity to help the next generation.

“It’s obviously a big loss for us with the retirement of Murts. He’s been a big part of the set up over the last seven or so years, and he’s been great to bowl alongside, but things have to move on.”

“We’ve got a young side, and I suppose I am now seen as our most experienced bowler. While it’s important that I still put my performances in, I do want to also help the young lads through as well. Whether it’s advice on their bowling, or their field placements against certain batters or in certain conditions - I see it as an opportunity to give a bit back to the youngsters, who are going to be a major part of this team moving forward over the next 5-10 years.”

Rankin said his preparations for the current series, while constrained with opportunities outdoors, allowed he and his teammates to concentrate on other parts of their fitness. He sees this as crucial considering the busy international schedule in 2020 that is building towards a T20 World Cup at the tail end of the year.

“It was nice to get a bit of time off after the T20 World Cup Qualifiers, but I’ve been back in the gym since mid-November and building back up my bowling workload indoors from early December.”

“Not having had much cricket over the last two months, it has perhaps given a number of us the opportunity to get a sound base on our fitness and health – which will be important given the big year ahead. We all have our fitness routines and has been important to continue to do what works best individually, like stretching or going to the gym. Fitness and health is such a personalised thing. Because I’m a bit older, at this stage I pretty much know what I need to do, while a few of the younger lads a possibly still at the stage of working out what works well for them.”

“I have to say though that we’re fortunate where we are right now - based right next to the beach, as there is no better recovery session than jumping into the sea and going for a swim.” Image: Rankin stretching ahead of play

Like his teammates, Rankin is enjoying the Caribbean surrounds but is focussed on what he is there to do.

“It’s been nice to get here and get into a bit of outdoor training and, now, match practice in. The warm-up games will hopefully allow me to get a bit of rhythm. I’m feeling pretty fresh and raring to go, but it’s a big year ahead and we know the West Indies will be a tough side.”

“The last time we faced them it was really a high-scoring game back in May at Malahide. It was nice to pick up a few wickets [he claimed three], but ultimately it was in a losing cause. I watched the Windies series against India and their batters seem in good form at the minute. But I’m actually not expecting pitch conditions to be too different to that last match we played at Malahide - the Malahide wicket is quite slow, and I think the wickets here in Barbados may also be slow as well. So, it will be important to get our lengths right - top of the stumps, top of the pads, try and force them into shots they don’t want to play.”

“It probably also suits us to play the one-dayers first, as we obviously haven’t played a lot of cricket over the last couple of months. The format probably gives you a bit more leeway in terms of batting and bowling. You can bat for longer periods of time – our batters can really get some time in the middle, and same with the bowlers, it gives us a chance to bash out a length.”

In mid-2019, Rankin was drafted into the Derbyshire Falcons squad for the T20-franchise competition, the Vitality Blast. He not only found this important for his own form, but also a reminder of how important opportunities like that can be for young Irish cricketers.

“That opportunity to play for Derbyshire in the T20 Blast was important for me, in terms of the training and the opportunity to get some volume in terms of my bowling in. I managed to get quite a lot of skill work done during that competition as well, which put me in good stead for the following T20I Tri-Series in Dublin and the World Cup Qualifier.”

“I think opportunities like that would be massively important for the younger Irish lads if they got the chance. To play day-in and day-out for a sustained period - just those six weeks I had, I kind of felt I was coming off the back of being a little rusty after a start-stop season with the weather and the fixtures. It was enough to get me back and hitting my straps.”

“Any opportunity to go play with, or just learn from some of the best players in the world will only help Irish cricket in the long run, particularly in the T20 format, but in many respects it can also help our 50-over cricket as well. Just being around those types of players, just being within those environments, it will help players, so any opportunity to do that is a no-brainer.”

Rankin is also known for getting ‘cold feet’ after training and matches – so, are we going to see more of that in the Caribbean?

“Aah yeah, you’ll certainly see more of me icing my feet! That’s pretty much the first thing I do once I finish a training session - I get my feet in a bucket of ice. I’ve done it for about 7 or 8 years now. I had had a few injuries early on, but since icing my feet - touch wood - I haven’t had any issues with them.”

“It’s a long year ahead, and for the bowlers it will be vital to be as fit and strong as possible. Ice will definitely be part of my regime.”

The second warm-up match of the tour will be tomorrow (4 January) against the CWI President’s XI in a 50-over match at the Three Ws Oval at the Cave Hill campus of the University of the West Indies. The first ball is 9am (local time) or 1pm (GMT).