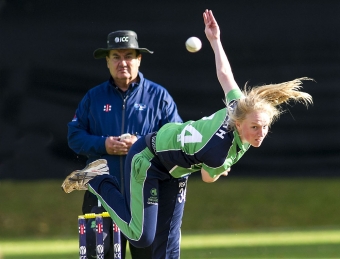 Ireland Women put in a brave display before falling to a 67 run loss against South Africa in Malahide.

The new opening pairing of Clare Shillington and debutant Una Raymond-Hoey scored 25 apiece as Ireland replied to South Africa’s 260 for 6.

Cath Dalton and Gaby Lewis fell early, but an 85-run fifth wicket stand between Isobel Joyce and Kim Garth gave the Girls in Green hope of pulling off a famous win.

Former skipper Joyce struck 8 boundaries as he she top scored with a superb 57, while current vice-captain Garth scored her second half century of the series with an undefeated 51.

At 160 for 4 with 15 overs left, Ireland were genuine contenders - however, star spinner Sune Luus claimed a five wicket-haul to extinguish Irish ambitions, as they lost six wickets for 33 runs to finish on 193 all out.

The impressive Wolvaardt struck 14 boundaries in her 105, while Chetty anchored the innings with 95 - before being run out from the penultimate ball of the innings.

Ciara Metcalfe (2-37), was again the pick of the Irish attack which fought back well after the initial onslaught. Lucy O’Reilly (1-43) and Isobel Joyce (0-46 in 10) keeping the runs in check.

The teams meet again on Thursday at The Hills in the final match of the series.