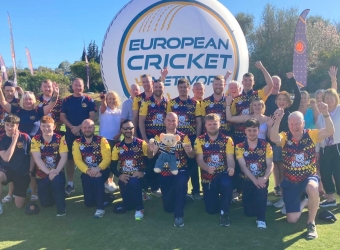 MALAGA, Spain - There has been plenty of international cricket this week, but while that was going on, Ireland’s Clear Currency All-Ireland T20 Cup champions Brigade Cricket Club were making their mark on the Group phase of the European Cricket League in Malaga.

The North West side lost their first game of the series to Griffins CC from Guernsey on Monday, but quickly found their stride after that.

Andy Britton’s team won their four remaining group games, as well as two Qualifying matches, and Friday’s semi-final and final - an incredible run of eight wins on the bounce.

Those results saw Brigade crowned group winners, and now means they will return to the Costa Del Sol for next month’s finals week with the chance to compete for the top European prizes.

Speaking ahead of Saturday night’s flight home, skipper Britton reflected on the success his team had enjoyed:

‘It was a brilliant experience the whole week and we’ll know what to expect when we go back next month for the finals. We definitely got better at the T10 format the more the week went on and we were a lot more confident going into the weekend.

“I’m delighted that everybody played their part. This was an important win for Brigade, but we’re also representing the North West and Cricket Ireland so it should hopefully mean a lot to everyone. We’ll start to prepare now for the finals in March. That will be a lot tougher of course but we’ll do our bit to be ready.”

Everyone in Irish cricket will be hoping that there is more success ahead for the North West team in that showdown series.

Read more about the European Cricket League and find all the scorecards here: https://www.ecn.cricket/european-cricket-league or you can follow the league on Twitter here: https://twitter.com/EuropeanCricket