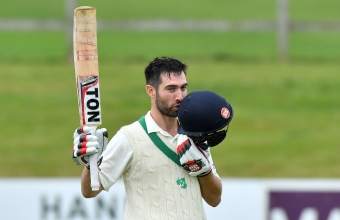 Andrew Balbirnie became just the third Ireland player after Eoin Morgan and Ed Joyce to record an International double century at Malahide on Wednesday as William Porterfield’s team took a firm hold after two days of their Intercontinental Cup clash against the Netherlands.

The former Middlesex batsman was in sublime form as he hit 23 fours and 2 sixes in a marathon, 336-ball 205 not out that allowed the home side to declare their first innings on 477-6.

Balbirnie shared a 183-run stand with Leinster Lightning team-mate John Anderson (74), before teaming up with Gary Wilson (39) to add another 76 for the fourth wicket. The in-form batsman rounded off an impressive showing with an unbroken 60-run partnership with Jacob Mulder (38)as Ireland piled on the runs.

“It’s a pretty big knock in my career, the highest score obviously, said Balbirnie. “It’s just great to gt us in a good position at the end of the second day’s play. I was only taking it down in tens, not really looking at my score but where the team was, 450 was always on our mind and luckily I had partners to push the score.”

Shane Snater was by far the pick of the Dutch bowlers as he claimed what was an impressive 5-116 in the circumstances but elsewhere the batting side were thoroughly dominant.

Boyd Rankin (2-26) gave his side a dream start early in the Netherlands reply as he reduced the visitors to 9 for 2 before an 83-run third wicket partnership between Ben Cooper and Dan ter Braak (32) repaired much the damage. A couple of late wickets for Mulder (2-38) put Ireland back in the box seat however and although Cooper remains unbeaten overnight on 81 (13 fours), Ireland will feel it was very much their day.

“We wanted a half hour before Tea,” said Balbirnie and Ireland took advantage of that and the extended evening session due to the early morning rain.

Day 3 will start at the slightly earlier time of 10.30 on Thursday as the sides bid to recover overs lost to rain in Dublin throughout the day.