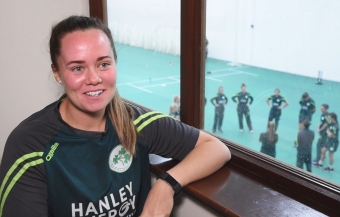 Captain Laura Delany spoke briefly ahead of the last group training session for the Ireland Women’s World T20 squad before they fly out to the Caribbean for the tournament.

Speaking at North County Cricket Club on Sunday, she said: “We have one week left - and while we have individual skill sessions this week, it’s been brilliant to get a final group session in before we leave for the World T20 tournament.”

“We fly out next Sunday and head straight to the West Indies. Our first warm-up game is the fourth of November, with our first group game starting on the 11 November against Australia. That will be a tough one first up but it’s always good to face a tough team in the first game.”

“We’re looking forward to the challenge of playing the best teams in the world. We’ve obviously had a lot of fixtures over the last 6-10 months, and we’ve shown at times that we are more than capable of competing with the best.”

“We’ve a lot of firepower in our batting line-up and we’ve shown we’re more than capable of holding our own with the ball. Our biggest challenge will be being consistent and putting the two together in the same match.”

“I’m more than confident with the preparation over the last few months that we are as prepared as we can be and we’re looking forward and getting out there and putting on a display now.”

The squad recently returned from a four-day training camp at La Manga in Spain and head to their third successive World T20 tournament in good shape. While the majority of the squad will depart from Dublin, Ciara Metcalfe (Australia) and Eimear Richardson (New Zealand) will join their teammates from where they are currently based.