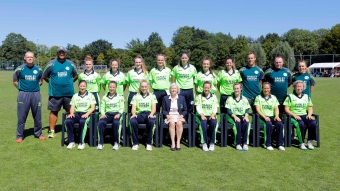 Carrie Archer has been a selector since 2016

Cricket Ireland has today announced Carrie Archer as the new Chair of Women’s National Selectors, and the appointment of Cathy Murphy as a new national selector for women’s cricket.

“Carrie has been a national selector since 2016, and has proven herself in being an insightful and strategically-minded voice in selection discussions. She has a wealth of knowledge from watching a lot of women’s cricket – particularly within the Leinster Women’s League, Super 3’s and in the international arena. Her ideas have shaped improvements in selection processes, and I’m certain she will do an excellent job chairing the committee and leading the selectors over the coming years.”

“We have also been fortunate to appoint Cathy Murphy as a new selector to the selector’s panel. Cathy is not only a former Ireland Under-21s and senior player, she is currently playing in the Super 3’s competition for the Scorchers, giving her a first-hand insight into many current and up-and-coming players. Cathy is passionate about cricket and women’s sport in general. She also coaches women’s rugby and has a good understanding of high performance within a sporting context. We welcome her on board at an exciting time for women’s cricket in Ireland.”

“I was extremely honoured to be asked to take on the position of Chair. I have learned a lot through the position of selector about the players and about international cricket and I am keen and willing to continue to learn within the role.”

“A Chair has an important part to play in ensuring the selection panel is well-rounded and filled with knowledge, experience and passion for women’s cricket. An effective selection panel is one that supports players and management in achieving the best outcomes for the game, both at domestic and international level.”

“It has been brilliant to watch the progress the players made over the summer, and now I am looking forward to the preparations for the Women’s World T20 tournament in November. We know that reaching the World T20 tournament is not the end of our ambitions, and that there is a lot of work to do in the coming months.”

“Our immediate goal is to begin the work in moving up the world rankings. To move from 10th to 8th position in the ICC rankings, for instance, would allow us to attract more regular international fixtures and that would be most welcome.”

“As a selection panel, we are committed to improving communication at all levels within the Irish Women’s set up and are highly aware that to compete at the highest level, commitment, professionalism and a culture of both diligence and resilience are important. This season alone has demonstrated that both players and coaches have ‘bouncebackability’ following the New Zealand White Ferns series and I will be looking to see that drive and motivation continue to play out in coming years.”

The Women’s National Selection panel is: