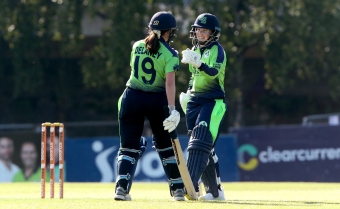 Leg-spinner Celeste Raack was speaking after training today. Raack, 28, made her international debut against Pakistan at the 2018 Women’s T20 World Cup in the West Indies. She has played five ODIs and 22 T20Is since, claiming 21 wickets across the formats.

The leg-spinners last T20I was against South Africa in Dublin in June this year and has earned a recall to the senior squad for the Pakistan tour.

“It’s great to be back in the squad. It was a very hard summer, missing a few tours. Once a one tour starts you don’t have that much opportunity, when they roll on and on, to get yourself back in there; as others are performing, which they did over the summer. The girls have had a brilliant summer, so it’s been hard to get my foot back in, but it’s great to be a part of it again. I’m just hoping that if I get a chance on this tour, that I’ll be able to play well and show the consistency that I have throughout the summer and hopefully stay in the squad for a long time yet.”

Raack said while it was disappointing not to get a victory in the three-match ODI series just concluded, she knows the side aren’t too far away from where they want to be:

“It’s never easy to lose three matches in a row, but the spirits are still very high among the group. We’ve managed to take lots of positives out of the games, and we’ve got clear areas of what we need to work on. It’s a great experience playing in this ICC Women’s Championship, playing against teams that are higher ranked than us in different parts of the world that we haven’t played in before. We know we’ve got the skill and we’ve got the ability to do it. We just need everything to click for us, so we don’t feel like we’re too far away.

“So there’s a huge amount of learning, but we’re really excited about playing the T20I series and showing Pakistan that we can really take it to them and that we’re ready for the challenge.”

As for the how the squad have been treated since arriving in Lahore, Raack said:

“We’ve been really enjoying it here. We’ve been confined to the hotel for long periods, but we’ve still managed to have a great time and we’re getting looked after really well by the locals and by the staff. We were lucky enough yesterday to have dinner with the Pakistan team, and we’ve had wonderful hospitality from the Pakistan Cricket Board (PCB), so that was a great experience. It’s mainly been a case of spending time with each other, something we’ve done a lot of in recent times with Covid, and tours that we’ve had in the past. So, we’re really used to it, and we’ve had a great experience so far.”

Looking ahead to the T20 World Cup in February, Raack says she’s not looking to put too much pressure on herself to make the squad:

“As for the T20 World Cup coming up in South Africa, I know there’s been a lot of talk about it amongst the group, and in even in the media. Qualifying again, after missing out in 2019, is very exciting for us all. Personally, I’m just trying not to put too much pressure on myself, and to just enjoy each game as it comes. And I know a lot of the other girls are doing the same.

“We’ve got a big squad, with a lot of people who have performed well throughout the summer, and the better we all are, the better the group will be. So those of us that are on the fringe, I don’t think there’s that much pressure among us. I think it’s really just a case of play the best that you can. Train as hard you can as you can, and believe that the best 15 that gets sent to that World Cup will be the best 15 players. The better everyone is collectively in our performance squad, the better that 15 will be.”

All matches will be broadcast live on Pakistan Cricket’s YouTube Channel.