Centurion Shillington shines for Ireland on day one 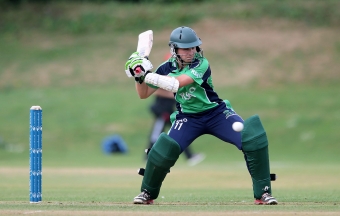 Clare Shillington blasted her way to an incredible 113 not out for Ireland in their convincing win over Durham on day one of the ECB T20 Group B competition.

The YMCA batter displayed an impressive array of stroke-making as she dominated the Durham attack from the get-go, and put on a brilliant unbeaten partnership with Elena Tice (41*) as Ireland posted a massive 183-2 off their 20 overs.

In reply Durham struggled to get up with the run-rate early on, and despite only losing two wickets, could only manage 81 runs off their 20 overs with Ireland running out winners by 102 runs.

Ireland’s second game of the afternoon, this time against Lancashire, didn’t follow the same script as the first game with a much closer finish. Batting first Ireland reached 119-5 off 20 overs, with captain Mary Waldron top-scoring with 33 before she was run out.

Some impressive catching in the field and behind the wicket kept the pressure on the home side throughout the second innings and the game was in the balance at the 14 over mark with Lancashire 87-5.

But the Lancastrians reached the target in 19.1 overs, to set up captivating second day where Ireland will meet both sides again - Durham at 1pm and Lancashire at 4pm.