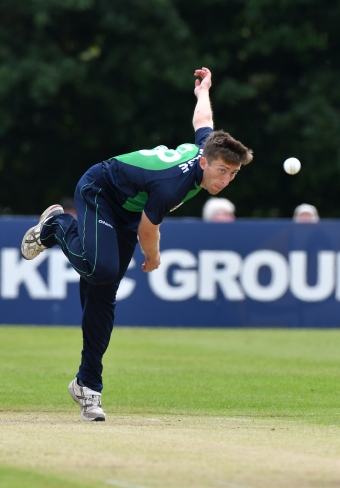 Peter Chase has been called into the Ireland squad for next month’s T20I series against Afghanistan.

The Malahide seamer replaces Josh Little who has withdrawn from the squad due to education commitments.

“Josh is only 17 and there were concerns about the time missed in what is a crucial period for his education,” said Cricket Ireland Head Coach John Bracewell.

“Peter gives us cover in the bowling department, and we’ll also have Niall O’Brien and Ed Joyce on stand-by for the T20 series as they’ll be in India preparing for the ODI and InterContinental Cup games which follow.

“Peter was impressive during the ODI series last summer against Afghanistan taking seven wickets, and gets that crucial extra bounce with his height,” added Bracewell.

23 year-old Chase has yet to make his T20I debut for Ireland, but has played eight ODI’s and one ICC InterContinental Cup tie.

The 44 year-old had a distinguished playing career with Leicestershire, Worcestershire and Central Districts scoring a combined 28,676 runs, which included 40 first-class centuries.

As well as coaching the first-team at Leicestershire, Smith has held roles with both Worcestershire and the ECB Development Squad.

He holds an ECB Level Four coaching badge, and is currently working in New Zealand as a specialist coach with Central Districts.

“We’ve appointed Ben to assist John Bracewell during the crucial tour,” said Performance Director Richard Holdsworth. “Andrew White did an excellent job during the Desert T20 but was unavailable for the tour due to work commitments.

“Given that Peter Johnston is tied up in his role as Acting National Academy and Performance Manager, while Ryan Eagleston is preparing the Under 19’s for their World Cup Qualifiers as well as working with the Emerging Academy we felt we needed to go outside for this temporary role.

“Ben has impeccable credentials, and I’m sure will bring valuable experience and knowledge to the Irish camp during the tour.”

Ireland play the UAE in two ODI’s at the ICC Academy 1 ground on March 2nd and 4th, before travelling to India to face Afghanistan in nine matches across three different formats.