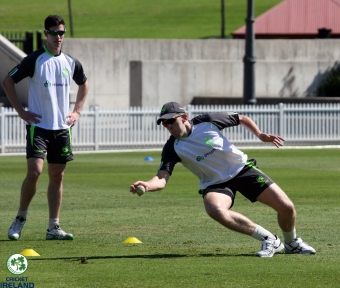 In our first player diary, Ireland fast bowler Peter Chase tells us about his World Cup journey so far.

When I was just five or six and following my older brother down to the cricket club I couldn’t have imagined I’d one day end up representing Ireland at a World Cup.

Even just a few months ago I wasn’t expecting any of this.  I was thinking about heading back to college to get on with my third year of a Sports Science degree at DCU, but now I’m at the biggest cricket tournament in the world.

It’s been an outstanding few months and it’s now been topped off by being awarded an A contract with Cricket Ireland, which, if I’m honest, was a bit of a shock and is something I’m really proud of.

When it all started back in Malahide I thought I was a batsman, I used to bowl very slow swingers and I’d played Leinster under 11’s and 13’s but then missed out on playing 15’s before I kind of grew a little and started throwing it down a bit quicker.

Returning to the fold at under 17’s and being coached by the likes of Brian O’Rourke and Nigel Pyne at Leinster and then Paul Tweddle at Malahide helped my development before it really kicked off with Ireland.

Being part of the World Cup is fantastic, there’s a great balance to the squad and being around someone like Brett Lee has been unbelievable.  Taking that knowledge from someone with his experience has be incredibly valuable for all of us.

I really enjoy Brisbane, I’ve been here a few times and I’m looking forward to being in the Gabba on Wednesday.  I’ve never been to Adelaide or Hobart so really looking forward to going there and see the big stadiums, I’ve not seen them before and it will be a great experience to be part of a World Cup match in them.

The best thing about the World Cup so far though has been the support we have received from back home, and from people all over the world.  It has been great to follow the #BackingGreen hashtag on Twitter and Facebook to see all the good luck messages and support we are getting.  It is something that helps drive us and we look forward to reading them between training and the matches!