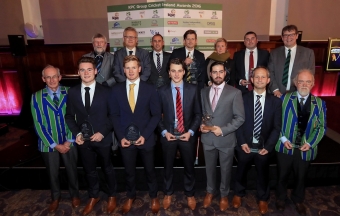 Ireland stars Ed Joyce and Ciara Metcalfe have been rewarded for impressive international seasons by being named winners of the top prizes at the 2016 KPC Group Cricket Ireland Awards.

Joyce fought off tough competition from Kevin O’Brien and Tim Murtagh to claim the KPC Group International Men’s Player of the Year award. He scored 522 runs during the qualification period at an average of 58, scoring two centuries against Afghanistan. It’s a hat-trick for Joyce, who previously won the award in 2013 and 2015.

Ciara Metcalfe scooped the Cricketshop.ie International Women’s Player of the Year award,  beating off the challenge of Isobel Joyce and Kim Garth. The Hills’ leg-spinner Metcalfe was rewarded after an excellent season saw her take 22 wickets at just 15.59, helping Ireland to wins over both South Africa and Bangladesh. She also took 4 for 15 against Sri Lanka in the T20 World Cup.

Two other Irish debutants picked up awards, with the Pembroke pair of Lorcan Tucker and Josh Little being rewarded for excellent seasons. Wicket-keeper/batsman Tucker was named Flogas Junior Player of the Year, while left-arm paceman Josh Little picked up the Shapoorji Pallonji Cricket Ireland Academy Player of the Year. Both played with great distinction during Ireland’s U19 World Cup campaign in Bangladesh, and are tipped for bright futures in the game.

There was double success for Leinster Lightning skipper John Anderson after an exceptional season at Inter-provincial and domestic level. In a year when his Leinster Lightning side completed a clean sweep of trophies, Anderson top scored with 440 runs at 48.89 which earned him the Hanley Energy Inter-Provincial Player of the Year award.

The Toyota Super 3 series continues to go from strength to strength, and for a series of excellent displays, Eimear Richardson was the judges choice for the Toyota Super 3 Player of the Series award.

Widely regarded as one of Ireland’s top umpires, Paul Reynolds has picked up the IAA Official of the Year Award for after a season which saw the Leinster man continue to impress all observers of the game with his quiet, professional manner.

Fellow Leinster man Rob O’Connor is a deserved winner of the Notts Sports Coach of the Year award. O’Connor has completely revitalised the Women’s section at the Rathmines club, helping all three sides reach their respective cup finals. He is also heavily involved at inter-provincial and international level with Leinster and Ireland Under 15 girls, as well as being one of the Toyota Super 3 coaches.

Cork County are the winners of the Tildenet Club of the Year Award after a superb season for the Munster club in which in addition to winning the Leinster Division Two title, they also retained the Munster Premier Division title.

Herbie Honohan and Eddie Lewis were both honoured for their contributions to Irish cricket, with Honohan being named the Oasis Group Volunteer of the Year and Lewis being presented with the Gibneys Outstanding Contribution to Irish Cricket award.

Honohan has been instrumental in the growth of youth cricket in Wexford through his coaching efforts, while also playing a vital effort in fund-raising for Wexford Wanderers as the club continues to flourish. Lewis has played a crucial role in the continued growth of Leinster and Irish cricket, with his incredible drive and passion for the game clear for all to see over the past decades.