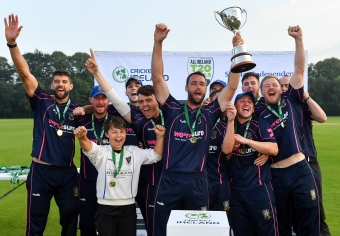 Captain Nigel Jones lifts the Cup for the first time

Earlier in the afternoon at their home venue of Belmont, CIYMS eased past North West champions Donemana by 10 wickets after James Cameron-Dow (4-10) helped reduce their visitors to 116-9 from 20 overs.

Irish international Andy McBrine (52) was in fine form but when he was stumped off the bowling of Jacob Mulder (3-18), it left Donemana short of a competitive total.

The opening duo of John Matchett (82*) and Chirs Dougherty (31*) knocked the runs off inside 15 overs to seal a comprehensive victory and their spot in the final against Leinster’s Malahide, who beat Cork County by seven wickets.

While the action was taking place up the road at Belmont, Cork and Malahide were battling it out at Stormont with County finishing on 130-7 from their allocation with Brandon Kruger (42) top-scoring.

Greg Ford (39*) and Damien Mortimer (31*) got Malahide over the line with 3.2 overs to spare and set up a 4pm clash with their NCU rivals.

Ford (40) and Mortimer (59) would again show their class in the final after Malahide had won the toss and elected to bat, putting on a fourth-wicket partnership of 86 to propel their side to 139-6.

The spin duo of Cameron-Dow (2-18) and Mulder (2-25) were again effective and the pair will be hoping they can carry similar form into this week’s Inter-Provincial Cup and Championship Northern Knights fixtures against the North West Warriors.

ACTION SHOT: James Cameron-Dow celebrates the run out of Desai. Malahide currently 44-3 in the 8th over. #AIT20 pic.twitter.com/Rxg2ngRJjp

Another century opening stand between Matchett (52) and Dougherty (47) broke the back of CIYMS’ chase before Mark Adair smashed a quick 26*, including one six that cleared the CSNI clubhouse!

>> See scorecard of the final here

That sealed a third trophy of the season for Nigel Jones’ men, and the captain was understandably delighted after, saying:

“We are delighted. We spoke about winning this competition after the NCU T20 Cup and to show the good cricket we have been playing. I’m delighted the boys could turn it on today. We had a good league game on Saturday and the guys got some runs there. We spoke about guys stepping up and scoring those 80+ scores – we haven’t really been good at doing that this year. It’s great to see in these last couple of days and when it counted they stood up.”

Matchett, who was named man-of-the-match for his half-century, hopes this weekend can give him more confidence heading into the remaining fixtures as CIYMS look to win another NCU Premier League crown.

“I feel I started very well, and not that I was batting badly, but just felt I wasn’t getting the scores I wanted to,” he said. “A weekend like this will do lots for my confidence I hope. We have five league games left, so hopefully I can kick on and get a few more.”