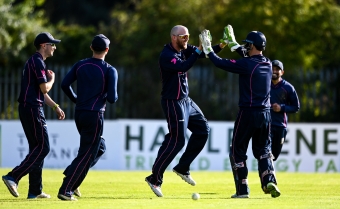 BELFAST – CIYMS captain Nigel Jones starred with bat and ball, and James Cameron-Dow claimed a remarkable hat-trick, as the Belfast-based side won their play-off match against YMCA by 15 runs and claimed the prize of being Ireland’s first-ever representative at the European Cricket League competition.

CIYMS captain Nigel Jones won the toss and elected to bat on their home ground but lost opener Chris Dougherty (1) in the first over.

John Matchett and Ireland international Mark Adair put on 27 runs together before the latter was bowled by Curtis Campher for 5. The following over saw the hosts in a little bit of trouble as they started to lose wickets and the runs were hard to come by as they slipped to 58-5 in the 14th.

However, Jones rose to the occasion and put his foot down, taking the game to the YMCA bowling attack scoring 41, including two fours and as many sixes, before being bowled by Rory Anders. CIYMS finished on what was considered a below par score of 110-6 from their 20 overs.

Early wickets were going to be the key for CIYMS and Mark Adair picked up two in his opening over with YMCA captain Jack Tector and his brother Harry both falling cheaply.

At 3-2, a rebuild was needed. Singh and Campher added 26 for the third wicket before the former picked out Jacob Mulder at long-on to leave YMCA on 29-3.

Jones (2-14) then made it 52-4 in the 12th over, removing Tim Tector for 11. Campher was now the anchor as YMCA needed to up the run-rate, however when he fell for 19 later in the over, CIYMS’ belief grew of a low-scoring win.

When Cameron-Dow picked up CIYMS’ sixth wicket, bowling Bobby Gamble for 17, YMCA still were in the hunt with an achievable 24 off 17 deliveries required.

But CIYMS held their nerve, and in the last over Cameron-Dow claimed a remarkable hat-trick of wickets including Tom Anders, Rory Anders and Mikey O’Reilly to seal the 15-run win.