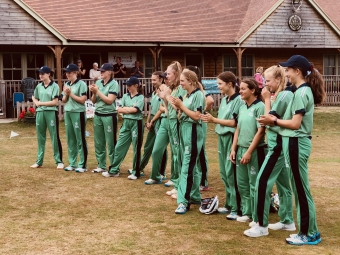 DUBLIN – Cricket Ireland has today announced the Under-19s and Under-15s girls winter training squads ahead of a big season for cricket in Ireland.

“It’s a great time to be involved in women’s sport in Ireland and 2019 is set to be a big year for cricket. This year will see the first-ever part-time contracts for women soon to be offered, international matches played at home and a Super 3’s competition that is getting bigger and better every year. The profile of the sport has certainly risen in recent times, especially around the broadcasts of our recent World Cup games late last year, and the focus now is to bring through a new generation of women cricketers that will take the sport forward.”

“Our winter training camps are an important part of developing our players core cricket skills during the off-season - both physical and mental. We are delighted this year to have recently retired Ireland legend Clare Shillington joining the coaching team. She has a wide range of coaching experience at school, club and Super 3’s level, and it will be a boost for the up-and-coming players to be able to tap into her experience.”

“Cricket has been a huge part of my life for many years now, not only on the field but coaching as well. Since my international retirement last year, I’ve been considering how I can stay within the game and be in a position to put back into the sport - to pass on some of the knowledge and experience I’ve gained playing for 21 years for Ireland. So I was delighted when asked to join the coaching group that will help bring through the next generation of women internationals.”

“There’s a good possibility that we will qualify for the Women’s Championship after 2021, and that could be a real game-changer for the sport. However, to regularly compete on the world stage against the best requires a lot of behind-the-scenes hard work and commitment to building up our youth and pathway structures. Hopefully, through the work we are doing at the Under-15s and Under-19s levels now, we can create that conveyor belt of talent feeding into the national team in future years. It’s an exciting time to be involved in this next stage of Irish cricket and I am delighted to be working alongside Andrew Poynter and Aaron Hamilton [Women’s International Head Coach] in bringing this group through to the next level.”