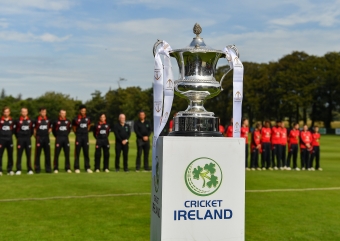 The Quarter-final draw has been made

DUBLIN – Last weekend saw 32 cricket clubs around Ireland competing in the second round of the Clear Currency Irish Senior Cup and Clear Currency National Cup competitions – the Quarter-Final Draw has now been made.

In the Clear Currency Irish Senior Cup, 2019 winners Pembroke were handed a home tie against CIYMS, whilst two-time Cup winners The Hills will host Lisburn at The Vineyard. The other quarter-finals are all-Leinster affairs as Balbriggan host Phoenix and Clontarf take on Leinster.

In the Clear Currency National Cup, County Galway - following their victory over UCC last weekend - will host Terenure. The current cup-holders Railway Union face another trip to the North West, after beating Strabane in the second round, this time to take on Ballyspallen. The last remaining NCU sides in the competition Cregagh and Derriaghy host Rush and North County respectively.

Watch our Second Round Analysis

Catch up on our review of the recent matches in the @ClearSpeaks Irish Senior Cup and National Cup, and find out who plays who in the Quarter Finals!#CCISC #CCNC #IrishCricket  pic.twitter.com/nLMnYqswxp

You can also see the first round scorecards on our match centre here.

The draw for the quarter-finals has been determined as follows (home team listed first):

Good luck to all teams in the Quarter-finals.

And thank you once more to Clear Currency for your support of our peak domestic club cup competitions.