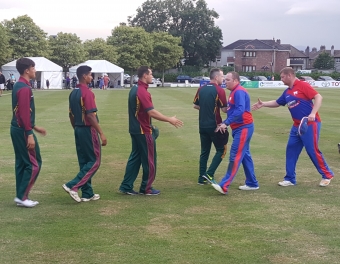 Merrion defeated Clontarf to set up a final against Waringstown

The semi-finals in both the Clear Currency Irish Senior Cup and Clear Currency National Cup were played today with two fascinating finals set up for the first weekend in September.

An unbeaten 99 from John Anderson was key to a two-wicket victory by Merrion over Clontarf, while a brilliant all-round performance from Kyle McCallan brought Waringstown a 167-run victory in Strabane, as the favourites set up a toss-up final on 1 September at Stormont.

After winning the toss and opting to bat first, Clontarf struggled to dominate the Merrion bowling attack. Bill Coghlan (56 runs from 110 balls; 6 x fours) played the anchor role, but a regular fall of wickets restrained the run rate. David Delany, batting at number seven, hit a powerful 44* (46 balls; 3 x fours, 1 x six) to ensure Clontarf set a target that gave their bowlers something to bowl at, finishing on 205.

For Merrion, Jack Carty (2-17 off 5 overs) and David Langford-Smith (2-20 off 5.5 overs) were the pick of the bowlers, with an overall good fielding display helping to keep the scoring down.

The Merrion run-chase was dominated by John Anderson. After sharing a 95-run second-wicket stand with Captain Dom Joyce, Anderson steered the innings to a successful conclusion with a well-crafted 99* (130 balls; 10 x fours). Despite losing eight wickets, Anderson kept the required run rate in check.

A double-wicket maiden 49th over from Ropu Islam injected a few nerves into the situation but Anderson struck his tenth boundary to seal Merrion’s place in the final in the last over.

Strabane won the toss and decided to send Waringstown in to bat. The decision appeared to backfire as Waringstown amassed 331-7 from their 50 overs.

Strabane’s response was shaken early with a wicket falling in the first over. Aaron Gillespie’s half-century (57 off 55 balls; 7 x fours, 2 x sixes) was the mainstay for Strabane but his side never looked likely to threaten the target, being bowled out for 164 inside 40 overs

For Waringstown, Kyle McCallan backed up his 75 with the leading bowling figures of 3-39.

In two comfortable semi-finals, Rush defeated Ballyspallen by 70-runs and Limerick beat Galway by 5-wickets to set up a National Cup Final date on 2 September at Stormont.

Rush made the long trip to the North West in a competition they’ve shown remarkable consistency in over recent seasons. After winning the toss and opting to bat, Rush put on 212-6 in their 40 overs before bowling the home side out for 142 in 33 overs to secure passage to a final berth in early September.

When it came to the chase, Ballyspallen’s best partnership came from their openers who put on 43 for the first wicket. After that, wickets fell at regular intervals as the Rush attack put the squeeze on the home side’s batting line-up.

Ballyspallen were bowled out for 142 with the final ball of the 33rd over and Rush had sealed a 70-run victory. Doheny was once again the star with the ball as his 4-13 off five overs gave him the best bowling figures.

In today’s other semi-final, Limerick bowled out their hosts, County Galway, for just 97 in a little under 20 overs.

Limerick chased the required runs in 18 overs as they made 99-5 to seal a 5-wicket victory.

As a result, Limerick CC become the first Munster side to reach a national cup final. They will face Rush in Stormont on 2 September 2018.