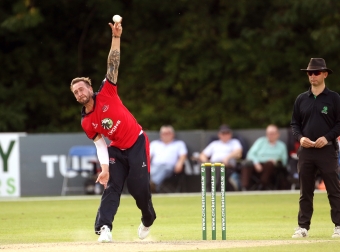 Defending champions Waringstown are through to the Quarter Finals

Defending Champions, Waringstown, are into the quarter-finals of this year’s Clear Currency Irish Senior Cup after edging past Malahide by two runs in a rain-affected game on Sunday.

Waringstown made 237 thanks to 70’s from both Lee Nelson and Greg Thompson, before Arjun Muntha had scored 92* and had guided Malahide to 192-7 in the 43rd over when the rain came down, leaving them agonisingly two runs short.

However, ‘Duckworth-Lewis’ didn’t help last year’s runners-up Merrion, who only made 130-9 when their game was reduced to 30 overs-a-side against CIYMS in Belmont. Obus Pienaar took three wickets. The home side had made it to 74-1 in the 18th over when the players were called off for rain and didn’t manage to return to the field. CIYMS were nine runs ahead on DLS at the time and thus prevailed.

At Sydney Parade, a sensational 126 from recently Irish capped, Lorcan Tucker propelled Pembroke to a mammoth 328-6 in their fifty overs against The Hills. Despite the Skerries side becoming quite well versed in chasing down targets this season, they couldn’t do the job this time around, falling for 163 all out in their reply.

Perhaps the most dramatic game of the round was in Rathmines where Leinster looked all but out when they were all out for 121 against Strabane, thanks largely to a spell of 4-31 from Ryan Gallagher. However, the home side never gave in during the run chase, and thanks to an exceptional 5-28 from Bilal Azhar, they bundled Strabane for 105, winning by 16 runs.

Many thanks to @StrabaneCC for a great match - played in an excellent spirit. Best of luck in the rest of the season

A fantastic 145 from Andre Malan of CSNI brought his side up to 244-6 from their fifty overs in a tightly contested game against North Down. However, North Down was on the brink at 218-9 with five overs left in the game when once again the rain intervened, the away side coming out on top by fifteen runs on DLS.

Jurie Snyman registered his second century in as many rounds as he brought Carrickfergus to 255-8 from their allocation in Castle Avenue against Clontarf. Half-centuries from Eoghan Delany and Andrew Vincent had brought the home side to 180-6 with ten overs left to go in their reply, but they were also fifteen runs behind when rain took over.

Elsewhere, there were comprehensive wins for Instonians and Phoenix. The former made 283-9 against Rush thanks to half-centuries from Nik Smith and Oliver Metcalfe, they made early inroads into the Rush batting line-up, coming out on top by 120 runs. As for Phoenix, they made sure it was a worthwhile trip up to Bready. They bowled the home side out for 156, before knocking it off for only the loss of two wickets, Ben Beecroft scoring 89.

The draw for the Quarter Finals of the Irish Senior Cup will be made this week.