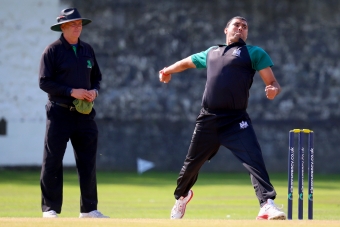 An incredible 145 not out from Kenny Carroll propelled Railway Union to an 88-run win over Limerick and booked their spot in the Quarter Final of the Clear Currency National Cup.

Railway Union, who batted first away from home, amassed 301-3 from their allocated 40 overs. Carroll’s heroics were ably assisted by Chad Laycock, who on his first innings for the club since arriving on exchange from South Africa, made an entertaining 77. Arslan Anwar’s 108* was a brave innings in reply for Limerick but when the rain intervened, they were 204-8. Leaving them 88 runs short on DLS.

There was also a quite remarkable innings from Majid Khan, who scored 178 of Midleton’s 267-5 as they chased down St Johnston’s 263-4 in a high scoring encounter in Midleton. Khan’s heroics ensured that they chased the over a run a ball target with five overs left to spare.

Terenure also progressed through to the next round after beating Downpatrick at home by 21 runs. Jack Webster scored 87 and Sid Nair made 60* as the home side scored 240-7 from their 40 overs. Downpatrick stayed in the game for large parts but eventually fell short, finishing on 219-9.

Balbriggan were the only other Leinster side to progress to the next round as they came out on top against North Kildare in a heavily rain-affected outcome. North Kildare was bowled out for 138 with Josh Newport taking 4-25. The Balbriggan run chase was well set at 59-2 after 18 overs in pursuit of their target before the rain interrupted, Balbriggan 7 runs ahead on DLS at the time.

Ross Bryans inspired Templepatrick to a fairly facile away success over Laurelvale. The home side batted first and made 174-8, three wickets apiece for Bryans and John Busby. The chase never looked in doubt for the visitors, as Bryans scored 57* as they cruised to an eight-wicket win with over five overs to spare.

Jason Milligan was the hero for Fox Lodge as they edged the closest encounter of the round. Milligan fired an unbeaten 118 as Fox Lodge got up to 204-6 in their 40 overs. Despite 80 from John Glass for Ballymena, they fell agonizingly 8 runs short, finishing on 196-8. Aaron Heywood providing the key with 4-30.

Ardmore got the better of Killyclooney in the other tie of the round. Killyclooney got to 198-6 from their 40 overs thanks massively to 112* from Giles Moan. However, it wasn’t enough as Decker Curry’s 92* has put Ardmore in a very commanding position of 168-3 with nine overs to go in the game when again, the rain intervened. Ardmore were 30 runs ahead on DLS at the time.

Cregagh’s game against Derriaghy was postponed and will be played on a later date.

The draw for the Quarter Finals of the National Cup will be made this week.