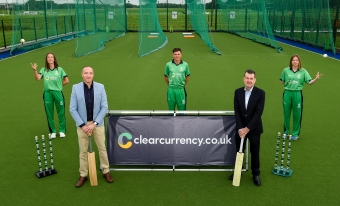 DUBLIN – Clear Currency has today been announced as the new sponsor of Irish international youth teams, deepening their ties with Irish cricket and providing a funding boost to benefit the under-age talent pathway that has been established to produce future Irish international cricketers.

Clear Currency has been Cricket Ireland’s official currency exchange partner since 2017, and in 2018 became title sponsor of the Irish Senior Cup and National Cup competitions. The new sponsorship will see Clear Currency take shirt sponsorship rights for boys and girls teams from under-13s to under-19s.

“Clear Currency has been involved with Cricket Ireland for several years now and it is great of late to see so many young players now stepping up to the senior international stage. This shows the importance of developing the game in Ireland, and Clear Currency are delighted to be able to support this remarkable growth. Whilst we have recently witnessed some of this success, it is important for everyone to believe that this is just the starting point and many successful years lie ahead.”

“The importance of sport has never been so strongly felt on society since the impact of the current coronavirus pandemic. Being active and getting out was something a lot of people took for granted until they were unable to. This was so evident in our young people and so now more than ever, it is important to invest in our future and provide clear pathways for our cricketers. Clear Currency are delighted to be in a position to help support underage elite cricket on the island of Ireland.” Being the world’s second largest sport, cricket can wield significant global power in the sports sponsorship world, and Mr. O’Flanagan believes Clear Currency has partnered with Cricket Ireland at a pivotal moment:

“Cricket as an international sport speaks for itself – the global audiences are massive and can provide a very strong platform for business to grow their profile. Cricket Ireland itself, both players and staff, have done a remarkable job in raising the profile of both the game domestically, and the Irish cricket brand on the international stage.”

“The evolution of the sport here in Ireland has been very impressive, rewarded recently enough with the elevation to Full Member status – although I know that Cricket Ireland don’t see this as an end result but merely a stepping stone for bigger and better successes. And that is why Clear Currency are pleased to be a partner on this journey – we see a mutual benefit in that there is an opportunity to increase our international profile, while being confident and assured that Cricket Ireland as a partner are on the road to delivering on their objectives too.”

“Alignment is the key is sports sponsorship – and in our partnership you can see that both organisations share a lot in common. We’re both successfully competing on very competitive international stages, and both have ambitious growth plans whilst maintaining high professional standards.”

But potentially the most transformative aspect of this sports sponsorship isn’t in the finances or at the Board Room level, but in the staff – and Clear Currency’s Chief Commercial Officer Paul Reilly is at the forefront of that change:

“While we’re a multi-national business, the staff experience and knowledge of cricket within Clear Currency is a mixed bag - ranging from the complete novice, all the way to a particular London-based staff member who is still holding out aspirations to make it in the county cricket scene.”

“My own journey with the game of cricket has come a long way. I have to admit when we began our business relationship with Cricket Ireland – despite being a sporting person – my knowledge of cricket was limited. However, I’m now fully immersed into the world of the game and this summer I’ve been seen supporting my own children on many a cricket field across Dublin. I won’t be betraying any secrets here, but I may even be making a Taverners debut myself before the season is out!”

“Clear Currency has grown from being a short-term sponsor to becoming a strategic partner that is engaged and invested in the future of Irish cricket and a key support for the domestic club game. This extension of their support is a welcome move – during a time of uncertainty and crisis, they have understood the importance of investment in youth and Cricket Ireland’s vision to create a sustainable conveyor belt of talent coming from the under-age to senior sides.”

“To have the ongoing support and investment of a partner like Clear Currency will help us to achieve that vision of a national talent pathway, making a brighter future for our sport.”

Clear Currency is part of Clear Treasury - an Irish owned business founded by ex-treasury bankers with offices in Dublin and London. It is a boutique treasury and risk management company bringing insight and stability to an uncertain environment. More: https://www.cleartreasury.co.uk/about