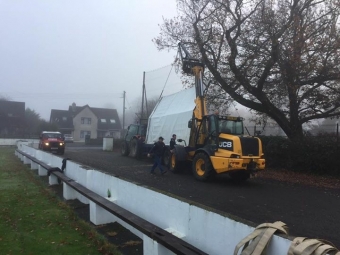 The process of changing covers at Eglinton Cricket Club this year

Throughout the off-season ground-staff, volunteers, club members and club officials expend lots of time and energy preparing their club’s grounds and facilities for the new season.

The continuous upgrade of facilities and equipment maintains a club’s playing base, ensures more cricket can be played throughout the summer and attracts new players and members into clubs.

As part of Cricket Ireland’s 2016-2020 Strategic plan, the governing body aims to incentivise clubs to improve facilities through a ground improvement grant/subsidy scheme based on club accreditation standards.

This process provided significant grants to clubs around Ireland in 2016 and the application process for 2017 is now open.

Below are examples of the ways in which the clubs, via the provincial unions, accessed funds for various improvements and new purchases.

The Munster Cricket Union provided grants to six clubs in 2016, the majority of which were for sight screens and practice nets.

Both County Kerry and Limerick cricket clubs raised over 60% of the cost of new sight screens on top of the grants received from the MCU. Lismore and County Galway also received contributions towards the cost of their new practice nets and pavilion upgrade respectively.

Cork County funded the purchase of a spiking roller and combi-rake 56% through fundraising of their own. Cork Harlequins, meanwhile found 62.5% of the cost of their heavy roller.

In the Northern Cricket Union 8 clubs were granted funds for improvements to facilities in their clubs.

Instonians and North Down received 50% of the grants they applied for to help towards a variety of improvements they looked to make in 2017. Templepatrick, Donaghcloney and Carrick all received grants towards specific equipment to help in pitch preparation including a soil spreader and a water remover.

Finally Muckamore and Waringstown were successful in applying for grants towards the cost of their flat sheets and sight screens respectively. In all cases, the clubs involved needed to at least match the funding provided in order to receive the grant.

Bready, Fox Lodge and Strabane all used their grants for improved drainage, while Bond’s Glen and Eglinton sought new flat sheeting and domed pitch covers. Unfortunately these were all tested to the full during the wild summer storms in the north west of the country.

Ardmore and Brigade used their grant to secure mowers, while Ballyspallen brought artificial matting into their club on the back of their grant.

Ashbourne, Carlow and Wicklow received funding for outfield mowers. Civil Service, Leinster, Pembroke, Railway Union and Terenure all applied for grants to purchase flat sheet covers along with other equipment for managing their pitches.

Bagenalstown, Malahide, Tyrellstown and Ringcommons successfully applied for grants to purchase mobile cages and netting, shelters for a second pitch and a bowling machine.

Slieve Bloom, Adamstown and Clondalkin all received grants to modify their facilities rather than on on-field equipment as another way to provide for their members.

The 2017 Club Facilities Grant Fund is open now with all applications made through the Provincial Unions. The examples above show how clubs around the country spent money improving their facilities and equipment over the past year.

The grants issued can be spent in a wide variety of areas to improve or upgrade facilities within clubs. This in turn assists in the clubs in maintaining their playing base and attracting new members.

Any clubs interested in applying for funding under this grant scheme should contact their local union to find out more information on criteria, application and submission details.

The deadline for applications is October 31st, 2017.