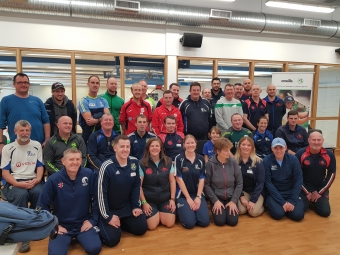 The group that attended the first workshop in Dundalk

Over 30 coach developers from across the four Provincial Unions gathered for the Cricket Ireland Coach Developer Training Workshop at the Dundalk Sports Centre on 6 October 2019.

This was the first workshop of its kind to be led solely by trainers from within the Cricket Ireland coaching community.

Representatives from Cricket Scotland, Hockey Ireland, and Sport Northern Ireland also attended, each adding an invaluable international or cross-sport contribution to the day.

The course was expertly led by trainers Andy McCrea and Brian Kelleher, who were supported by a group of experienced coach developers that voluntarily gave of their time and own expertise to deliver a series of practical sessions.

WATCH: Over 30 coach developers from across the four Provincial Unions gathered for the Cricket Ireland Coach Developer Training Workshop at the Dundalk Sports Centre on 6 October 2019. Learn more on the Cricket Ireland website (link in bio). #BackingGreen

The primary aim of the workshop was to build the capacity and capability of coach developers in the Provincial Unions so that the Unions can meet the increasing demand for the two new Cricket Ireland coaching courses, Coaching Kids 5-11 Years, and Coaching Cricket. But the day was about more than just building a coach developer workforce able to deliver the two courses.

“For me, a key outcome for the workshop was the sharing of knowledge and experience, with a view to encouraging collaboration in the coach developer space. We are fortunate to have some truly outstanding trainers and coach developers, and it’s important we create opportunities for everyone to learn from each other.”

“I also want to acknowledge the work and support of each of the Provincial Unions in identifying a group of coach developers who will be able to facilitate great experiences for coaches attending the courses.”

“To grow the game, we need to ensure the participants, whoever they may be, have positive experiences. For new and emerging coaches, the coach developers delivering courses and workshops are so important in this regard.”

With thanks to O’Neills for their continued support to all our coaches through the Cricket Ireland Coaches Association.