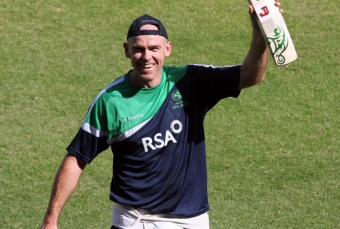 Former Ireland captain Johnston will oversee Leinster Lightning’s campaign against the Northern Knights, coached by Eugene Moleon and the North-West Warriors, who will have Bobby Rao in charge.

It’s another chapter in an extraordinary career for Johnston who said: “I’m really thrilled to be offered the position by Cricket Ireland - it’s the best phone call I’ve received since [former national coach] Adi Birrell asked me to be skipper in 2005.

“I’ll be looking to help the younger and less experienced players make the transition from club cricket to the international side. The Inter-Provincial series is a great pathway for those players.”

Johnston, who will be 39 later this month, brings a wealth of experience to the position, having coached club sides Clontarf, Railway Union and YMCA in Dublin.

“I’ve had a fair bit of success in club cricket down the years and I’ve also really enjoyed working with the bowlers in the Ireland camp,” Johnston added. “It’s no secret that I’ll be looking to go into coaching when my playing career ends, and this gives me a perfect platform.”

Johnston is one of Ireland’s all-time cricketing greats, having taken 257 wickets and scored 2347 runs in his 180 appearances to date, while he is also one of only three players to have taken a hat-trick for Ireland.

But he will have to overcome tough opposition if Leinster are to prevail in round robin matches in the different formats of three days, 50 overs and T20.

The North West will fancy their chances with former Indian Test player Rao at the helm. The 58-year-old, who was recently awarded an MBE, is one of the top coaches in the country, having fulfilled a variety of roles at all levels in the North West and for Ireland over the past 20 years.

A classy middle-order batsman and leg-spinner, Rao played for India four times, averaged over 40 in first-class cricket, and skippered Hyderabad to the Ranji Trophy in 1987.

Rao joined Strabane as an overseas professional in 1980 and stayed in the north west of Ireland, also playing for Sion Mills, Eglinton and St Johnston. He represented his adopted country six times in the mid-90’s, before becoming assistant to Mike Hendrick, the first full-time Ireland coach.

The third successful applicant, Eugene Moleon, who will coach the Northern Knights, based in Belfast, played 13 seasons of first-class cricket in South Africa for Western Province, winning both first-class and one-day competitions with the region.

He has also brought success to Instonians, where the hard-hitting all-rounder has been instrumental in the Shaw’s Bridge club winning five major prizes in the past five seasons - his tenure as player/coach ending a barren spell of 40 years without a trophy.

Performance Director Richard Holdsworth welcomed the three coaches to Cricket Ireland. He said: “The quality of applications both within Ireland and from overseas for these posts was overwhelming, and it was incredibly tough for CI and the respective Union panels to choose from the talent on offer. In the end, we chose those we felt best incorporated the required skills and experience, as well as the vital regional connection that would help bring some heart to this new venture. It’s also a testament to the esteem in which Irish cricket is held nowadays, and I’d like to thank all those who applied.

“The three head coaches and team administration officers selected bring a wealth of talent and experience to their regions, and I wish them every success for the forthcoming competitions.”

For more details on the Inter-Provincial fixtures, click here